Treatment and survival rates for stage IV pancreatic cancer (ie, metastatic pancreatic cancer or MPC) have gone up during in the past 10 years, according to the results of a VA study published in the Journal of Gastrointestinal Oncology. The advent of new anti-neoplastic agents has boosted survival.

In the current retrospective study, nationwide data were mined from the National Veterans Affairs Cancer Cube Registry for 6,775 patients (97.44% men; 39.39% aged over 70 years; 38.02% aged 60-70 years) who were diagnosed with metastatic pancreatic cancer between 2000 and 2014. American College of Surgeons’ (ACS) Committee on Cancer (CoC) accreditation was taken from the ACS website.

According to results of the study, MPC makes up 52.31% of all pancreatic cancers diagnosed. The share of early-onset pancreatic cancer (EOPC) was 2.84%. Per the authors, EOPC may be underrepresented because the study population skewed older.

Historically, the only available treatment for late-stage disease was gemcitabine. Recent trials, however, have demonstrated multiple gemcitabine combinations as well as FOLFIRINOX have been effective in increasing median survival by several months, while decreasing impairment of quality of life.

A 1996 review of the National Cancer Database uncovered that only 35% of patients with MPC received chemotherapy; whereas, by 2016, estimates rose to a mere 50%. Moreover such undertreatment is not only a U.S. problem, with one Canadian study showing that only about one-third of patients with MPC completing referrals to a medical oncologist.
Current NCCN guidelines recommend that clinical decision-making concerning diagnostic management and resectability include multidisciplinary teams at high-volume healthcare centers.

“The ACoS CoC accreditation of VA hospitals is not associated with a change in treatment or survival rates of MPC. This likely reflects the high degree of uniformity and conformity of standards of care amongst VA hospitals,” concluded the authors. 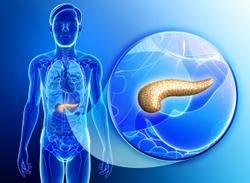