Gilead Sciences has submitted an NDA to the FDA for its new drug idelalisib, for the use in patients with indolent non-Hodgkin lymphoma that is refractory to rituximab and chemotherapy.

Gilead Sciences, a pharmaceutical company based in Foster City, California, has submitted a New Drug Application to the US Food and Drug Administration (FDA) for its new drug idelalisib, according to the company. The application is for the drug’s use in patients with indolent non-Hodgkin lymphoma that is refractory to rituximab and chemotherapy.

“Based on the rate and duration of response observed to date in this highly refractory indolent non-Hodgkin lymphoma patient population, we believe idelalisib could become an important new therapy for patients who have limited treatment options,” said Gilead’s chairman and CEO John C. Martin, PhD, in a press release.

The drug is a targeted, highly selective oral inhibitor of phosphoinositide 3-kinase (PI3K) delta; the PI3K delta signaling pathway is hyperactive in many hematologic malignancies. The New Drug Application for idelalisib is based primarily on results from a single-arm, open-label, phase II study, interim results of which were presented in June at the International Conference on Malignant Lymphoma in Lugano, Switzerland.

The study included 125 patients with indolent non-Hodgkin lymphoma, and all patients were refractory to rituximab and to alkylating-agent-containing chemotherapy regimens. The analysis showed an overall response rate of 53.6%, and a median duration of response of 11.9 months. The median progression-free survival was 11.4 months.

Most patients (89%) experienced lymph node shrinkage while on the study drug. The most common grade 3 or worse adverse events were diarrhea, in 10% of patients, and neutropenia, in 26% of patients. Thirteen percent of patients also experienced elevated transaminase levels.

Idelalisib is now being studied in a number of other trials along with the phase II studied used to support the NDA. These include two phase III studies in the same patient population, one testing the drug in combination with rituximab and another in combination with both rituximab and bendamustine. Other phase III studies focus on chronic lymphocytic leukemia (CLL), including other combination regimens involving bendamustine and ofatumumab.

If the FDA approves the NDA for idelalisib, the company notes it would be the first PI3K delta-targeted therapy for any hematologic malignancy, and the first novel class of drug for indolent non-Hodgkin lymphoma approved in more than 10 years. 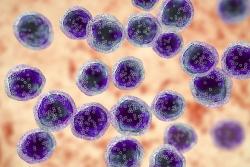 Next Generation of CAR-T Therapies in Lymphoma