"Pancreatic cancer still remains very refractory to treatment, presumably because of chemotherapy resistance mechanisms," said Dr. Cusack, assistant professor of surgery, Harvard Medical School. This resistance appears to be mediated at least in part by activation of NF-κB, a transcription factor that has antiapoptotic activity, allowing cancer cells to survive. "Essentially, the way we envision using proteasome inhibition to target NF-κB is by stabilizing one of its inhibitors, IκBα, which is normally degraded by the proteasome," he explained.

Salinosporamide A (NPI-0052, Nereus Pharmaceuticals, Inc), is derived from a marine bacterium. Preclinical testing shows that this agent shares certain features with bortezomib (Velcade), currently the only proteasome inhibitor approved for clinical use: Both agents have cytotoxic as well as cytostatic activity, are active when given intravenously and orally, and inhibit the trio of enzymatic activities of the proteasome (chymotrypsin-like, caspase-like, and trypsin-like). There are some noteworthy differences as well, Dr. Cusack commented. Bortezomib binds the proteasome reversibly and has a half-life of roughly 9 to 15 hours, whereas salinosporamide A binds irreversibly and therefore has a longer half-life, approximating that of proteasome itself. Also, at equivalent doses, salinosporamide A is a more potent inhibitor of proteasome enzymatic activities, particularly of the trypsinlike activity. And finally, whereas bortezomib is lethal when given at a dose that inhibits proteasome activity by 80% or more, salinosporamide A can be given safely at doses that inhibit activity by nearly 100%.

In an in vivo experiment, the research team used the panc-1 mouse xenograft model of pancreatic cancer, starting with tumors measuring 8 to 10 mm in diameter. Relative to tumor volume in mice given the triple combination of gemcitabine, erlotinib, and bevacizumab, tumor volume in mice given the same combination with added salinosporamide A was a significant 3.1-fold less after 4 weeks of treatment. For comparison, addition of bortezomib to the triple combination reduced tumor volume by a significant 1.9-fold. Similar though smaller gains were observed when the proteasome inhibitors were instead added to the triple combination of gemcitabine, gefitinib, and bevacizumab. Of note, Dr. Cusack commented, actual tumor shrinkage has not been previously achieved in pancreatic cancer with other drug combinations.

Although the four-drug therapy had some mild toxicity, the addition of salinosporamide A was generally well tolerated in this in vivo model, Dr. Cusack said. Specifically, adding the new agent to the triple combinations was not associated with a further increase in weight loss during treatment.

Taken together, the findings suggest that proteasome inhibition enhances the response of pancreatic cancer to multi-drug therapy, and salinosporamide A seems to be somewhat more effective than bortezomib in this regard, Dr. Cusack concluded. "We are interested in pursuing this in a phase I/II setting for the clinic, using this combination of molecular therapy and conventional chemotherapy, in combination with salinosporamide A," he commented. Testing of these protocols in patients with pancreatic cancer are expected to begin in 2006, he said. 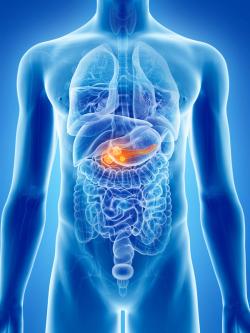