A phase I trial found that panobinostat combined with epirubicin is well tolerated and could offer benefit in patients with refractory sarcoma.

A phase I trial found that panobinostat combined with epirubicin is well tolerated and could offer benefit in patients with refractory sarcoma.

“More than half of patients treated for localized soft tissue sarcoma will experience relapse,” wrote study authors led by Pamela N. Munster, MD, of the University of California, San Francisco. Histone deacetylase (HDAC) inhibitors have shown some promise in other early phase I studies with anthracyclines. “Furthermore, HDAC inhibition was shown to promote differentiation and apoptosis in sarcoma.”

The new phase I trial combined the HDAC inhibitor panobinostat-which was approved in February 2015 for the treatment of multiple myeloma-with epirubicin. It began as a 3 + 3 dose escalation trial in patients with advanced solid tumors, followed by an expansion cohort at the maximum tolerated dose in 20 sarcoma patients. The results were published in Annals of Oncology.

In total, 40 patients received 20- to 60-mg panobinostat; 17 patients had previous exposure to topoisomerase II inhibitors. The study drug was administered on days 1, 3, and 5, followed by 75-mg/m2 epirubicin on day 5, in 21-day cycles. Dose-limiting toxicities were seen at 50 mg (one patient) and 60 mg (two patients); these included atrial fibrillation, grade 4 thrombocytopenia and febrile neutropenia, and grade 3 fatigue. The recommended phase II dose was set at 50 mg, and the 20 sarcoma patients in the expansion cohort received this dose.

In only the 20-patient sarcoma expansion cohort, 12 patients were deemed to have received benefit from panobinostat. There was one response in those patients, and 11 patients had stable disease for longer than 3 months. The median progression-free survival in these patients was 3.4 months, and the median overall survival was 8.3 months. The authors noted that acquired topoisomerase resistance was reversed in 8 of 14 patients.

“A major challenge in HDAC inhibitor therapy is the absence of biomarkers,” wrote the authors. In this study, they showed that patients with a “pronounced degree” of peripheral blood mononucleocyte histone acetylation were more likely to derive benefit from the therapy. A decrease in neutrophil count over the first 5 days of the first cycle of therapy also was correlated with clinical benefit.

“This study suggests that further investigation of HDAC inhibition in combination with DNA-damaging agents in defined advanced sarcoma subtypes to validate these preliminary findings is warranted,” concluded the authors. 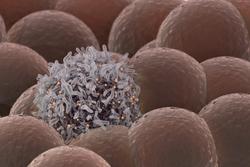