According to investigators, study findings could help guide treatment decisions and future research, as well as suggest new biomarkers for exploration.

Research published in JCI Insight identified systemic inflammation as a possible resistance mechanism to a CD40–based chemoimmunotherapy in patients with advanced pancreatic cancer.1

According to investigators, these findings could help guide treatment decisions and future studies as well as suggest new biomarkers for exploration.

“CD40 is a really exciting target, especially in pancreatic cancer, where agonistic monoclonal antibodies have shown a lot of promise, but we know that these agonists still face obstacles in certain patients that weaken the drug’s intended effects,” lead author Max M. Wattenberg, MD, a clinical instructor of Medicine in the division of Hematology-Oncology in the Perelman School of Medicine at the University of Pennsylvania, said in a press release.2 “We believe we have not only identified a potentially robust biomarker, but also important players in the immune system we didn’t see before that may drive mechanisms of resistance.”

In order to gain insight into immunological mechanisms of response and resistance to chemoimmunotherapy, investigators evaluated blood samples from 22 patients with advanced pancreatic ductal adenocarcinoma (PDAC) treated with the anti-CD40 monoclonal antibody (mAb) CP-870,893 in combination with gemcitabine. Ultimately, the study revealed a depletion of B cells, monocytes, and dendritic cells as well as activation of CD4-positive T cells over a period of 8 days in most patients.

“These latest findings support the fact that inflammation seems to place the immune system at a disadvantage and in doing so prevents the ability of immune therapies to work,” senior author Gregory L. Beatty, MD, PhD, an associate professor of Hematology-Oncology at Penn’s Perelman School of Medicine, said in the release. “Next, we’re interested to learn how to pair a T-cell immune response with a CD40 agonist, so we are studying combinations that will help make the inflammatory response less suppressive and the components of the immune system more capable of triggering a T-cell response.”

Notably, an important limitation of this study was the use of gemcitabine as chemotherapy. At the time of study initiation, gemcitabine was the only FDA-approved systemic treatment for advanced PDAC; however, 5-fluorouracil in combination with oxaliplatin and irinotecan (FOLFIRINOX) and gemcitabine combined with nab-paclitaxel (Abraxane) are now standard of care. Therefore, it remains unclear as to whether multiagent chemotherapy, compared to gemcitabine alone in combination with a CD40 agonist, may produce distinct immune responses such as those observed in preclinical models.

“In this regard, an ongoing phase 1b/2 trial (NCT03214250), studying the combination of a CD40 agonist (APX005M) and gemcitabine plus nab-paclitaxel with or without nivolumab, will be informative,” wrote the study authors. 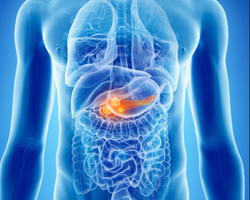