A team of investigators from various institutions on the East Coast analyzed data from 2 large multicenter clinical trials that included patients with advanced melanoma who received treatment with immunotherapy. Using an area under the time-dependent receiver operating characteristics curve (AUC), the radiomics signature reached an AUC for estimation of OS status of 0.92 (95% CI, 0.89-0.95) compared with 0.80 (95% CI, 0.75-0.84) with RECIST 1.1 at month 3. Furthermore, the radiomics signature was divided into 3 parts, ranging from best to worst estimated prognosis—complete or partial response (32.4%), stable

“Overall, our results suggest that the radiomics signature is unambiguous and parsimonious and provides a better separability of classification,” investigators said.

Currently, physicians rely almost entirely on tumor size to see if a therapy is working for a patient, according to investigators on the study. However, the investigators wanted to see if artificial intelligence could better estimate OS in a specific patient population. They developed a machine learning algorithm that scanned information captured by routine CT scans to determine patient outcomes.

The investigators retrospectively examined CT images, obtained at baseline and first follow-up, and data were collected from July 1, 2019, to September 15, 2021. Data were prospectively collected from the phase 2 KEYNOTE-002 clinical trial (NCT01704287), which assessed patients with stage III/IV melanoma who were given either pembrolizumab (Keytruda) or investigator’s choice of chemotherapy to see which improved progression-free survival and OS, as well as the phase 3 KEYNOTE-006 study (NCT01866319), which analyzed OS in patients with advanced melanoma treated with pembrolizumab vs ipilimumab (Yervoy).

At month 3, the radiomics signature estimated the individual probability of OS for each patient on a scale of 0 to 1.

“These values represented the extremum estimated prognoses (from the most to the least favorable OS),” investigators said.

The radiomics signature combined 4 imaging features, 2 related to tumor size and 2 reflecting changes in tumor imaging phenotype, according to study investigators. In the validation set, which included 287 patients treated with pembrolizumab, the investigators found that radiomics signature outperformed the standard method based on tumor diameter, Response Evaluation Criteria in Solid Tumors 1.1 (RECIST 1.1).

In addition, investigators challenged the ability of RECIST 1.1 to accurately assess immune checkpoint inhibitor efficacy. They found that 9 out of 11 patients who were classified as having pseudoprogressive disease at month 3 by initial RECIST 1.1 actually had a month 3 radiomics signature with favorable OS.

“Once in clinical use, our signature could give clinicians in practice an early readout of the likelihood of success when treating patients with advanced melanoma with pembrolizumab. In clinical trials, this new approach could complement other response assessment metrics and increase the efficiency of drug discovery for cancer,” investigators concluded. 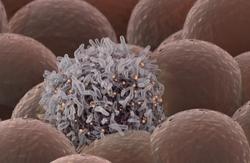