Clinicians now have a new targeted therapy option for treating patients with advanced renal cell carcinoma (RCC) who have received prior antiangiogenic therapy.

“Cabometyx is distinct from other approved treatment options, as it targets multiple tyrosine kinases involved in the development of RCC, including MET, AXL, and three VEGF receptors. At the same time, physicians are very familiar with this class of drug and how to use dose adjustments to balance safety and efficacy,” said Toni Choueiri, MD, Clinical Director, Lank Center for Genitourinary Oncology, Dana-Farber Cancer Institute, in a press release. “The approval of Cabometyx is wonderful news for physicians who are looking for a new option for their previously treated patients with advanced kidney cancer.”

The most common (frequency ≥25%) adverse reactions in cabozantinib-treated patients included diarrhea, fatigue, nausea, decreased appetite, hand-foot syndrome, hypertension, vomiting, weight loss, and constipation. Dose reduction rates were 60% for cabozantinib and 24% for everolimus in the phase III trial. The rate of treatment discontinuation due to adverse reactions was low, with 10% in each arm and consistent with that previously reported for everolimus.

Results published November 5, 2015, in The New England Journal of Medicine, METEOR was an open-label trial of 658 patients with advanced RCC who had become refractory to at least one prior vascular endothelial growth factor (VEGF) receptor tyrosine kinase inhibitor (TKI) therapy. The trial was conducted at approximately 200 sites in 26 countries. Patients were randomized 1:1 to receive 60 mg of cabozantinib daily or 10 mg of everolimus daily. All the patients were stratified based on the number of prior VEGF receptor TKI therapies received and on Memorial Sloan Kettering Cancer Center risk criteria.

Cabozantinib targets include MET, AXL, VEGFR-1, VEGFR-2, and VEGFR-3. It has been shown in preclinical models to inhibit the activity of these receptors, which are involved in normal cellular function and pathologic processes such as tumor angiogenesis, invasiveness, metastasis, and drug resistance. Cabozantinib will be available in 20 mg, 40 mg, or 60 mg doses. The recommended dose is 60 mg orally, once daily. 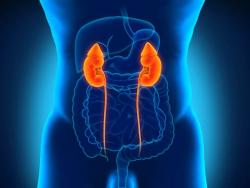