Results from a phase 2 trial indicated that subgroups of patients with advanced or metastatic sarcoma may benefit from durvalumab plus tremelimumab, with data encouraging further evaluation in the population.

Durvalumab (Imfinzi) plus tremelimumab was found to be an active combination in patients with advanced/metastatic soft tissue and bone sarcomas, with data encouraging further studies in specific subsets of patients, according to results from a phase 2 trial (NCT02815995) published in The Lancet Oncology.

For those with other sarcomas or alveolar soft part sarcoma and chordoma, the protocol was amended to allow for an expansion in the study due to rapid enrollment. Additionally, for those with liposarcoma, vascular sarcoma, undifferentiated pleomorphic sarcoma, synovial sarcoma, and osteosarcoma, enrollment was halted because robust responses were not confirmed.

After completion of therapy, 2 patients with alveolar soft-part sarcoma had a complete response that lasted for over 12 months. After 23 months on surveillance, 1 of the aforementioned patients had disease progression and the other had resection of residual primary disease without evidence of disease 4 years and 5 months following the end of treatment. A total of 20% of patients with cutaneous angiosarcoma achieved a partial response via irRECIST criteria along with 20% of those with undifferentiated pleomorphic sarcoma and 20% of those with chordoma. Fifty percent of patients with alveolar soft-part sarcoma achieved a response by irRC, along with 20% of those with chordoma, 20% with undifferentiated pleomorphic sarcoma, and 10% with cutaneous angio-sarcoma.

Of 60 treatment-related adverse effects (TRAEs), 21 were grade 3/4. Common high-grade TRAEs included increased lipase (7%), colitis (5%), and pneumonitis (5%). Serious TRAEs occurred in 16% of patients, the most common of which was colitis in 5% of patients. Discontinuation of treatment because of AEs was necessary in 11% of patients due to pneumonitis, colitis, and myocarditis, in 2 patients each. 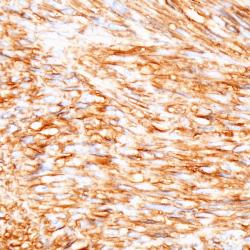