LP-284, which now has orphan drug designation from the FDA for mantle cell lymphoma, yielded positive preclinical data at the 2022 American Society of Hematology Annual Meeting and Exposition.

The FDA has granted orphan drug designation to the investigational small molecule agent LP-284 for the management of mantle cell lymphoma (MCL), according to a press release from Lantern Pharma.1

“Receiving orphan drug designation is an important milestone for our latest drug candidate, LP-284, and further validates our data-driven approach to oncology drug discovery and development,” Panna Sharma, president and chief executive officer of Lantern Pharma, said in the press release. He also noted that the findings presented at ASH were “critically pertinent due to the high relapse rate and poor prognosis of the majority of patients [with MCL].”

LP-284 is a novel agent that preferentially damages DNA expressed in cancer cells with mutations in DNA damage repair pathways. The agent was designed to manage several types of B-cell non-Hodgkin lymphoma, including MCL and double hit lymphoma.

In the preclinical investigation of LP-284, investigators assessed the survival benefit and efficacy of the agent in xenograft mice with MCL compared with ibrutinib and bortezomib. Investigators administered 2 mg/kg or 4 mg/kg per dose of LP-284 intravenously vs 50 mg/kg per dose of oral ibrutinib or 1 mg/kg of bortezomib as intraperitoneal therapy.

Other primary objectives from the study included exploring the agent’s mechanism of action in inducing DNA damage and blocking transcription as well as evaluating its toxicity profile and pharmacokinetics in dogs.

The manufacturers of LP-284 will file an investigational new drug application with the FDA and organize a first-in-human phase 1 trial for the agent in the management of B-cell non-Hodgkin lymphomas including MCL by mid 2023. 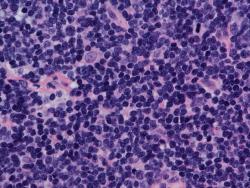