The combination of two oral targeted agents, dabrafenib (Tafinlar) and trametinib (Mekinist), has been given a priority review by the FDA for the treatment of BRAF V600-positive metastatic melanoma.

The combination of two oral targeted agents, dabrafenib (Tafinlar) and trametinib (Mekinist), has been given a priority review by the US Food and Drug Administration (FDA) for the treatment of BRAF V600 (both V600E and V600K)–positive metastatic melanoma. A decision by the FDA is expected in January 2014.

Both dabrafenib and trametinib were each individually approved as monotherapy for patients with BRAF V600E–positive metastatic melanoma in May of this year. The THxID BRAF assay, developed by France-based bioMerieux, Inc, was also approved for detecting of BRAF V600E tumor mutations.

Approximately 40% of metastatic melanoma patients harbor a BRAF mutation. Both drugs target the mitogen-activated protein kinase (MAPK) pathway. Dabrafenib directly targets the V600E-mutated BRAF protein. Trametinib is an inhibitor of the MEK protein in the MAPK pathway. MEK is known to be activated in melanoma, downstream of the BRAF protein. Another V600E BRAF inhibitor, vemurafenib (Zelboraf), is also approved for BRAF V600E-mutated metastatic melanoma.

The results of the phase I/II dabrafenib/trametinib combination trial were previously published in the New England Journal of Medicine. Median progression-free survival was 9.4 months in the combination arm compared with 5.8 months in the dabrafenib alone arm (HR = 0.39, P < .001). Patients were treated with a once-daily 2 mg trametinib dose combined with 150 mg of dabrafenib twice daily. These are the same approved doses for monotherapy use. Of the patients taking the combination, 76% had a partial or complete response compared with 54% of patients treated with dabrafenib alone (P = .03). 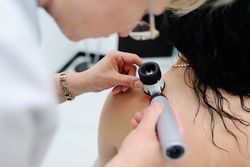