Single-agent ibrutinib resulted in significantly improved outcomes for older patients with chronic lymphocytic leukemia (CLL), compared with treatment with chlorambucil, according to results of the RESONATE-2 trial (abstract 495) presented at the 57th Annual American Society of Hematology (ASH) Meeting and Exposition, held December 5–8 in Orlando, Florida.

“The phase III RESONATE trial confirmed the efficacy of ibrutinib in treatment-naive CLL patients, leading to a 91% reduction in risk of progression and an 84% reduction in risk of death when compared with chlorambucil,” said Alessandra Tedeschi, MD, of Azienda Ospedaliera Niguarda CÃ  Granda in Milan, Italy, during a press conference. “Importantly, ibrutinib significantly improved bone marrow function and this is very important in this elderly population in which bone marrow failure is a common cause of morbidity.”

Ibrutinib is a first-in-class, oral, covalent BTK inhibitor. It is currently approved for the treatment of patients with CLL with one or more prior lines of therapies, or as first-line treatment in patients with 17p deletions.

A phase II study of ibrutinib in patients with treatment-naive CLL showed an 84% overall response rate, with 81% of patients continuing on treatment at 3 years follow-up.

According to Tedeschi, CLL typically occurs in an older population of patients with an increased number of comorbidities. As a consequence, she said, many of these patients are undertreated.

This study included 269 patients age 65 years or older with treatment-naive CLL who were randomly assigned to ibrutinib 420 mg daily or chlorambucil 0.5 mg/kg, which at the time of the study design was the standard first-line therapy in these patients, on days 1 and 15 of a 28-day cycle.

“Importantly, at the time of study completion, 87% of patients in the ibrutinib arm are still continuing treatment,” Tedeschi said. 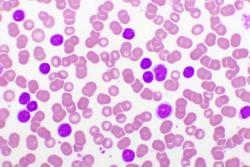