The ALL expert spoke about new research in the field and how it has changed the landscape for this disease.

In an interview with CancerNetwork®, Joseph Wynne, MD, clinical instructor of medicine at UChicago Medicine, spoke about developing research in the treatment of patients with acute lymphoblastic leukemia and what physicians should consider when treating this population of patients.

CancerNetwork®: What research is exciting you most in the field of ALL?

Wynne: One has been, sort of in the last 8-10 years, the development of chimeric antigen receptor (CAR) T-cell products to treat ALL, both the initial phase with FDA approvals for children and (young adults; AYAs) up to like 25, having that product available is exciting. And, you know, being a part of some of that research in some of those trials has been exciting. As well, sort of ongoing trials to try to do like the next generation of that is pretty cool, where they look to both make CAR Ts that can target multiple different targets on the cell surface so that you can’t as easily escape the targeting of the CAR T, as well as developing products that are what’s called “off-the-shelf,” where you can use actually donated T-cells from a healthy donor to make CAR T-cells for cancer patients instead of having to rely on first collecting their own CAR T-cells to then individually make a product for them. So I think sort of the next generation of that for the relapse setting is very exciting, and sort of just all of the different tweakings that people are doing to kind of improve upon the initial success and try to improve the durability of what we’ve already been able to accomplish with the first generation of these things.

I think in the frontline setting, the sort of ongoing research that’s interesting to be a part of, at least from my perspective, has been our part of the ALLIANCE. We have an ongoing phase III ALLIANCE trial to see if we take inotuzumab (Besponsa), which is an antibody drug conjugate which was FDA approved a couple of years ago for relapse/refractory ALL, and if we move it to the front-line setting in a randomized fashion, plus or minus this in addition to standard therapy, can we improve outcomes. So, that’s clinically a very interesting question and we’ve been enrolling any of our patients that were eligible and interested in that trial.

Looking at the data from the study of dasatinib (Sprycel) compared to imatinib (Gleevec) in pediatric patients with Philadelphia-positive (PH+) ALL by researchers at St. Jude Children’s Research Hospital and the Chinese Children’s Cancer Group, how do you think this trial has changed the treatment landscape?

I’m an adult oncologist, so I have a sort of different perspective on this trial. You know, there’s a couple interesting comments to make about the trial. One is how, by combining it with sort of the broad brute force of how large a population China has to conduct some of these experiments is pretty impressive and St. Jude partnering with them is a sort of impressive tour de force because PH+ ALL is not very common in pediatric settings, it’s much more common in adults. They haven’t really had the power to look at this question as clearly as they could here, so just in general it’s pretty impressive that they were able to get so many patients so quickly in a rare form of childhood cancer.

The thing that I find interesting is the standard of treatment for kids, because of the smaller number that they have, is that they are still using imatinib for PH+ ALL. For adults, we don’t use imatinib. …For adults for years we’ve been already using dasatinib, because it is a more potent (tyrosine kinase inhibitor; TKI) and in adult trials it’s shown that it is better, and now we have data in the kids in a randomized setting which shows that even in that population that the same thing holds true.

What is something that you think is important consider in treating patients with ALL?

You know the one thing I always mention with ALL, and you know cancer in general, is that despite the successes we’ve had we always want to do better. And the way that we will hopefully get to do better is by enrolling patients on clinical trials to sort of assess that. I think that for children, in pediatrics, the COG, Children’s Oncology Group, has been sort of the example by which we all wish to emulate, especially on the adult side, where the majority of children get enrolled in protocols that continue to push the envelope of what’s the best treatment for ALL.

With the majority of patients, try to get them enrolled in trials, phase III trials, to test exactly what is the best way to treat this disease and try to always do incrementally better. I think for AYA and adults, a lot less patients are ever enrolled in clinical trials, especially in the front-line setting. And I think that in trying to encourage people to participate in those to continue to do better and better is something that we should all strive for. 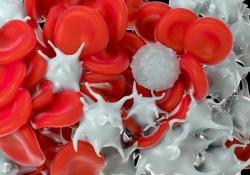