Researchers at Wake Forest Baptist Medical Center’s Institute for Regenerative Medicine are hoping to help advance the war against cancer with a new system called, “metastasis-on-a-chip.”

Researchers at Wake Forest Baptist Medical Center’s Institute for Regenerative Medicine are hoping to help advance the war against cancer with a new system called, “metastasis-on-a-chip.” In the journal Biotechnology and Bioengineering, the team published a study suggesting that this system may have advantages over animal and 2-D cell culture models employed in metastasis research and drug discovery.

Investigators report that this system has been successfully shown to track in real-time, fluorescent colon cancer cells migrating from hydrogel-fabricated gut construct to downstream liver constructs within a circulatory fluidic device system that responds to environmental manipulation and drug treatment. The devices have two chambers in which gut and liver constructs are housed independently. The two chambers are connected via circulating fluid flow. The researchers have biofabricated a novel system, which appears to be capable of a variety of customizations.

Advances in personalized medicine allow clinicians to select optimal medical therapies for treating advanced cancer based genomics. However, this study device goes a step further and uses a mini-model of the human body to see how each patient’s actual tumor responds to medical therapy.

The current version of the system models a colorectal tumor metastasizing to the liver.  Future versions may look at metastasis to the lungs and to bone marrow. The team also plans to model other types of cancer, including glioblastomas.

To create the system, researchers encapsulated human intestine and colorectal cancer cells inside a biocompatible gel-like material to make a mini-organ. A mini-liver composed of human liver cells was made in the same way. These organoids were placed in a chip system made up of a set of microchannels and chambers etched into the chip’s surface to mimic a simplified version of the body’s circulatory system. The tumor cells were tagged with fluorescent molecules for monitoring purposes.

To test the system’s potential for screening drugs, the team introduced marimastat into the system and found that it significantly prevented the migration of metastatic cells over a 10-day period. The team also tested 5-fluorouracil and it reduced the metabolic activity of the tumor cells.

The system provides the opportunity to study the microenvironment of tumors. So far, the scientists have learned that a “stiffer” tumor is more apt to metastasize, suggesting the possibility of using drugs to alter the mechanical properties of a tumor in order to prevent metastasis.

The research team is currently looking to perfect the system by using 3-D organoids to mimic natural organ structure and add a barrier of endothelial cells (cells that line blood vessels) since metastasis occurs when tumor cells penetrate blood vessels. 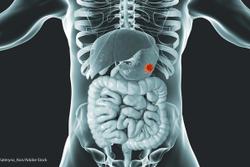