That was in March 1999, 2 weeks after the last plane had made a failed attempt to bring one last batch of supplies to the scientific research station operated by the National Science Foundation.

Dr. Nielsen described her ensuing ordeal at the 25th Annual Meeting of the American Society of Breast Disease (ASBD). [She has also written about her time at the Pole in the book Ice Bound (Talk Miramax Books, 2001).]

Dr. Nielsen had arrived at the Pole in November 1998 to serve as the station’s only physician and second in charge for 1 year, well advised about the months of isolation. Planes cannot land at the site for about 8 months out of the year when temperatures may plummet to -110° F. "There is no way out. There is no way to get you anything," she said. "So, I didn’t expect any kind of rescue."

For 3 months she told only one trusted friend at the station about her lesion. "I started preparing for my own death," she said. She reorganized the hospital, putting supplies in labeled kits, and photocopied pages from medical books, highlighting important areas for the people who would have to take over for her in the event of her incapacity or death. She also wrote short treatises on some medical situations that might arise.

"Then I kind of secretly started training people to take over for me, but I told them it was because I needed assistance," she recounted. "I taught them how to run the x-ray machine, how to run IVs, etc."

A couple of months after discovering the breast mass, Dr. Nielsen confided her situation via e-mail to a physician who was a good friend. He put her in touch with Kathy D. Miller, MD, an oncologist at the University of Indiana, and they began corresponding.

"Three months into this," Dr. Nielsen recalled, "I got lymph nodes under my arms that were palpable. I started to have backaches, and my breast was hurting like crazy. By this time, the lump was 5.5 cm. It was really hard and fixed, and I knew I was in trouble. So I went to the head of the station and told him, not because I wanted rescueI didn’t think I could bebut because I wanted permission to take people off work so that I could train them to take over my medical duties."

Instead, the head of the station contacted the National Science Foundation, and its officials reached the decision to make an unprecedented attempt to save her life by dropping chemotherapy. With Dr. Miller as Dr. Nielsen’s lead physician, plans began to take shape.

The first step was a biopsy. "I trained a carpenter and a welder to help me do the fine-needle biopsy," Dr. Nielsen said. The available Wright’s stain used on the slides did not work because it was old. New pathology stains had been part of the cargo on the plane that could not land in February. After chemotherapy drugs and new stains were dropped in July, the biopsy was repeated.

To send images back to the United States, Lisa Beal, a computer technician, built a system that utilized a camcorder, a microscope "that was 50 years old," Dr. Nielsen said, and a computer. "She managed to get pictures good enough to send my magnified slides back to pathologists in the United States," she said, "and they were able to say that I definitely had breast cancer."

Dr. Miller’s plan of action began with leuprolide (Lupron) to stop ovarian function, and then tamoxifen (Nolvadex). "At least that would hold me for awhile until we knew whether or not to start chemo," Dr. Nielsen noted. She said that Dr. Miller chose the chemotherapy based on what she thought would be easiest for Dr. Nielsen to self-administer and would have the fewest side effects that she would not be able to treat.

The Most Hostile Place on Earth

Antarctica, Dr. Nielsen said, "is the highest, driest, coldest, most hostile, most remote place on earth. We were living at 9,600 feet, so we had altitude problems." As a result, hypoxia is the norm. "We were all hypothermic all the time, 95° to 96° F," she said. "Calcium metabolism is affected. Thyroid function is affected."

‘Toasted’ at the Pole

After many months at the South Pole, hypothermic, hypoxic, and sensory deprived, "you become what we call toasted," Dr. Jerri Nielsen said in her talk at the ASBD meeting. "You have to start carrying around a little green reminder notebook, which we call our green brain." She recalled one incident where people were trying to remember the name of the country that is shaped like a boot. Someone suggested it was where Italian food came from, but they still couldn’t quite think of it.

All the time zones converge at the Pole, and with the sensory deprivation caused by the darkness of winter, "you have no concept of the future or the past," Dr. Nielsen said. Wintering over for a year results in a loss of about 30% of one’s memory, she noted.

Her first meeting with the physician she was relieving revealed the impact of sensory deprivation. He walked in and said, "Strong, real strong. Strong work, yeah," and left. But within 5 days he had taught her the rudiments of polar medicinealthough not how to self-administer chemotherapy.

Dr. Nielsen’s regimen began with paclitaxel (Taxol). "I taught a heavy equipment mechanic and a machine operator to give me the drug, while the welder started my IVs," she recounted. "It worked really well."

The weekly sessions included the link-up with Dr. Miller and her oncology nurse, LaTrice Haney. "I called it the Marx Brothers do chemotherapy at home," Dr. Nielsen joked. "It was not easy because the satellites would go out, and I had a lot of infiltration of drug into my arm and such, as you can imagine. But it worked, and the tumor became smaller."

By September, however, the tumor began to grow again. Dr. Miller had sent two different regimens, and the team now switched to a combination of methotrexate, fluorouracil, and oral cyclophosphamide (CMF).

"But at altitude, on the ice, and we don’t have any idea why, I became extremely ill with the chemotherapy," Dr. Nielsen said. "I continued to do my job, but it started to look like I had brain mets and lung mets. I became so dizzy that while walking, I would just suddenly spin and grab walls."

Not wanting to alarm anyone, she did not tell her co-workers about her new problems. "But they all found out because I had one of my dizzy spells when I was cooking, and I fell into a lit stove and got burned, so it became obvious," she said. "Also I became extremely short of breath and required oxygen a lot of the time. I was having a great deal of back pain, and I was dropping things with my right arm. At this point, my veins all collapsed. I developed phlebitis, and we couldn’t find any more veins."

At the insistence of Dr. Miller, the National Science Foundation then decided to bring in another physician for the station and fly Dr. Nielsen out. "They came in to rescue me at the soonest possible moment, October 16," she said. "It was the earliest anyone had ever gone in to bring someone outever."

Once back in the States, Dr. Nielsen entered the University of Indiana Medical Center for a lumpectomy, but she developed a staphylococcal infection in the wound that required her rehospitalization for 7 days. Because of the damage caused by infection, she later had a mastectomy as well as further chemotherapy and radiation therapy.

"Many people when they have cancer do change," she observed. "They change in a way that is very positive, and many say,‘If I had a choice, I would have gotten cancer.’ For me, would I have gotten cancer at the South Pole if I had a choice? Yes. Because it is a profound experience that can change you and send you on a new pathway in life, and we often need obstructions so that we can make our life richer." 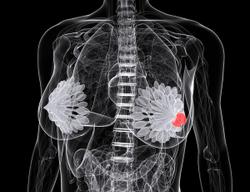