The overall survival improvements were observed when tumor-treating fields were combined with immune checkpoint inhibitors with a positive trend towards improvement when combined with docetaxel in those with stage IV non–small cell lung cancer.

Treatment with tumor treating fields (TTFields) combined with standard therapies resulted in a statistically significant and clinically meaningful improvement in overall survival (OS) compared with standard therapies alone in patients with stage IV non–small cell lung cancer (NSCLC) after treatment progression on or after a platinum-based therapy, according to a press release from Novocure.

Data on the combination came from the phase 3 LUNAR trial (NCT02973789), with investigators reporting that the primary end point of improved OS was met. Investigators reported a statistically significant and clinically meaningful benefit when TTFields were combined with immune checkpoint inhibitors over immune checkpoint inhibitors alone. There was also a trend towards OS benefit when TTFields were combined with docetaxel vs docetaxel alone.

Enrollment was balanced between the immune checkpoint inhibitor and docetaxel arms between the TTFields and the standard of care cohorts and was found to be in line with previous research. TTFields’ safety profile was also well tolerated.

A full readout of the LUNAR trial is planned for a future medical conference and a Premarket Approval application is expected to be submitted to the FDA in the second half of 2023.

To be eligible for the trial, patients needed to be 22 years or older with a life expectancy of 3 months or more. Patients needed to have a histologic diagnosis of squamous/non-squamous, inoperable, or metastatic NSCLC and evidence of radiologic progression on or following platinum-based chemotherapy. An ECOG performance status of 0 to 2, the ability to receive standard of care immune checkpoint inhibitor or docetaxel, and the ability to operate a NovoTTF-200T device either alone or with the aid of a caregiver was required.

Patients with central nervous system (CNS) metastases and clinical symptoms or evidence of new CNS metastases at screening were grounds for exclusion. Other exclusion criteria included being contraindicated to receive immune checkpoint inhibitor or docetaxel and having severe comorbidities such as hematologic, hepatic, and renal dysfunction; a history of significant cardiovascular disease unless otherwise controlled; a history of symptomatic arrhythmia requiring treatment, a history of pericarditis, or history of interstitial lung disease.

Those who have received concurrent treatment with another experimental regimen, an implantable electronic device in the upper torso, or known allergies to medical adhesives or hydrogel were also ineligible for enrollment in the LUNAR trial. 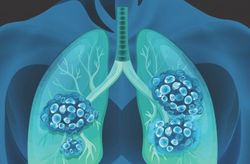