For patients who can tolerate aggressive multimodal therapy for anaplastic thyroid carcinoma, survival rates can exceed historical outcomes, according to a retrospective study of patients treated at the Mayo Clinic.

For patients who can tolerate aggressive multimodal therapy for anaplastic thyroid carcinoma (ATC), survival rates can exceed historical outcomes, according to findings from a retrospective, single-institution review reported by researchers from the Mayo Clinic in Rochester, Minnesota, at the 15th International Thyroid Congress (ITC) and 85th Annual Meeting of the American Thyroid Association (ATA), held this week in Lake Buena Vista, Florida.

“Although limited by a small number of patients, our experience suggests that aggressive multimodality therapy has potential to result in longer-term survival in ATC patients, especially in lower stage disease,” reported lead study author Aditi Kumar, MBBS, of the division of endocrinology at the Mayo Clinic in Rochester, Minnesota.

“Such aggressive therapy comes at a cost, however, including requirement for frequent provider contact and intensive therapies-as well as considerable toxicities,” Dr. Kumar emphasized.

Historical outcomes in ATC have been “dire,” Dr. Kumar said, noting a historical median overall survival (OS) of approximately 5 months for this patient population. “However, we observed apparently improved survival in association with aggressive multimodal therapy in a small series of ATC patients with locoregionally-confined disease.”

The earlier pilot analysis of 10 patients treated with aggressive radiosensitizing and adjuvant chemotherapy plus intensity-modulated radiotherapy had revealed an OS of 60 months, with a 1-year OS of 70% and a 2-year OS of 60%, Dr. Kumar noted.

Her team therefore expanded the series to include 29 patients diagnosed between 2003 and 2015 with ATC who were then treated with aggressive multimodal therapy regardless of cancer stage.

Of the 56 patients with pathologically confirmed ATC during that period, records show that 20 (35%) underwent palliative care and 33 (58%) underwent definitive-intent therapy. Of these 33 patients, three enrolled in clinical trials and one underwent radiotherapy only; these four patients were not included in the analysis.

These patients received an aggressive regimen of chemotherapy and radiotherapy, and most also underwent surgery. Most (93%) of the patients underwent surgery, with 24% and 52% achieving R0 (no residual tumor) and R1 (microscopic residual tumor), respectively, Dr. Kumar reported. All patients underwent chemotherapy, with 24 (83%) receiving taxanes and 19 (66%) receiving docetaxel/doxorubicin, which is the Mayo Clinic standard of care when deemed tolerable to the patient. “All patients received definitive-intention locoregional radiation,” Dr. Kumar reported, with a median radiation dose of 66 Gy (range: 46–70 Gy) delivered in 2-Gy dose fractions, with a median of 33 dose fractions per patient.

Of the 29 patients, 24 completed the treatment regimen, 1 died, and 4 discontinued treatment due to treatment-associated toxicities, Dr. Kumar said.

“Certainly, selection bias was there,” Dr. Kumar acknowledged, noting that only patients deemed eligible for definitive treatment were included in the study. Palliative-care patients who had been excluded from the study group had an average OS of 4.6 months vs the 22 months for study participants, Dr. Kumar noted after her presentation. “If you combine the palliative and study participants, you get an average overall survival of about 10.2 months-which is still better than the historical survival of about 5 months,” she noted. 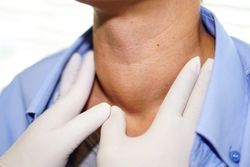