Advances in the Treatment of Myelofibrosis - Episode 2

The most common symptoms that present in patients with newly diagnosed myelofibrosis and variables that factor into initial treatment decisions.

Aaron T. Gerds, MD: Definitely, all those symptoms are present in a lot of patients. Every patient seems to be a little different. They have a different mix of what symptoms they are presenting with, but I would say far and away the most common is fatigue. That’s an almost universal issue and not just for myelofibrosis. I would say with all MPN [myeloproliferative neoplasms] patients, fatigue is something that we see often, and is probably one of the more difficult symptoms to treat. Primarily because of the multifactorial nature of fatigue and the vagueness of the symptom as well, but it is clearly associated with the presence of myelofibrosis.

John Mascarenhas, MD: It sounds like from the audience polling, fatigue was also the most commonly chosen symptom. Tonight, 77% of the participants are noting fatigue. Raajit, I know you see a lot of patients that have fatigue and I think you're also often fatigued. What drives fatigue in myelofibrosis?

Raajit K. Rampal, MD, PhD: Well, it's a complicated question. Oftentimes we have to spend time trying to figure it out. For example, if a patient has anemia, it's often a conundrum: is the anemia driving the fatigue or is it the disease or is it both? I think very commonly the answer is both, but it's hard to tease out that answer. Aside from that, we have a lot of hypotheses about what drives fatigue in the disease and we blame cytokines. There may be truth to that because we do see a correlation between improvements, for example, in cytokine profiles, in patients treated with JAK inhibitors and improvement in symptom burden; very commonly fatigue improves despite the fact that oftentimes they develop some degree of anemia. I think the answer is that it's often multifactorial.

John Mascarenhas, MD: Srdan, when you're approaching a patient with myelofibrosis and thinking about the symptoms that we're talking about, whether it's abdominal pain, fatigue, night sweats, or weight loss, how are you formulating your treatment plan based on those symptoms? Is it a symptom-based targeted approach to alleviating them? Can you alleviate fatigue in MF? What's your thought process?

Srdan Verstovsek, MD, PhD: Well, we would first try to objectivize them by asking patients to answer some specific questions. As we know, the NCCN [NationalComprehensive Cancer Network] guidance, supports or strongly suggests the use of MPN 10, a questionnaire that covers 10 of the most common questions. We utilize that questionnaire as a guide for discussion, and it becomes a part of their medical record. We print the questionnaire and ask patients to answer each of the 10 questions on a scale from 0 to 10 so we can get a score. Not that a particular score will lead me to specifically treat that particular symptom, but it will give me a sense and perhaps even give the patient an idea of their quality of life. If there are symptoms that are affecting the quality of life, that is usually a trigger for me to say, “We don't want you to suffer. We want to improve that quality of life.”

John Mascarenhas, MD: Of course, as you guys would know, you have to also make sure that other competing comorbid conditions aren't also contributing to those symptoms and confounding the situation, which for many of our patients, they don't live in a vacuum and they may have other conditions that might also lead to fatigue and other symptomatology. It's clear that symptoms are a significant burden to myelofibrosis and are therapeutic target and intent for amelioration with treatments.

Advances in the Treatment of MyelofibrosisAround the Practice 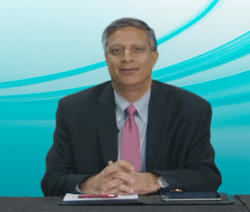