Teclistamab appeared to be a safe and efficacious treatment for patients with relapsed/refractory multiple myeloma, according to a phase I study presented at the ASCO Virtual Scientific Program.

Patients with relapsed/refractory multiple myeloma may have another treatment option in teclistamab (JNJ-64007957), which appeared to be a safe and efficacious treatment, according to a phase I study presented at the ASCO Virtual Scientific Program.

Another treatment option would be a welcome change for these patients, who tend to have poor prognoses once they run out of treatment options, according to Saad Z. Usmani, MD. After becoming refractory to available therapies, median overall survival (OS) is 6-11 months.

“Multiple myeloma is a complex disease, and despite recent advances with new therapies, patient outcomes are poor once available classes of therapies are exhausted,” Usmani, chief of the Plasma Cell Disorders Program and director of Clinical Research in Hematologic Malignancies at the Levine Cancer Institute, Atrium Health, said while presenting the findings.

The study (NCT03145181) involved 78 patients with relapsed/refractory myeloma who received teclistamab – a bispecific duo antibody that binds to BCMA and CD3 – intravenously. Median age was 64 years old (range, 24-82), and the median number of prior therapies was 6 (range, 2-14). Overall, 72% of participants were triple-class exposed, 62% triple-class refractory, and 51% penta-drug refractory.

The drug became active in patients receiving 38.4 µg/kg or higher, with 21 out of 52 patients (38%) achieving a response, per IMWG criteria. Two patients were minimal residual disease (MRD)-evaluable per next-generation sequencing, and they both were MRD negative at 10-6 with treatment ongoing > 12 months.

“Looking at the durability of response, we concluded that the responses deepened over time,” Usmani said, noting that 16 of the 21 patients who responded have an ongoing response.

The most common adverse events (AEs) of all grades were cytokine release syndrome (CRS; 56%), neutropenia (26%), and anemia (23%). CRS typically occurred during the initial doses, and all CRS events were grade 1-2. Additionally, 8% of patients experienced a treatment-related neurotoxicity (grade 3 or higher, 3%) and 9% had an infusion-related reaction.

A total of 61% of patients experienced an infection-related AE with 21% of them being grade 3 or higher. Reported dose-limiting toxicities were delirium (which was resolved after 16 days) and thrombocytopenia (resolved after 1 day).

More than a third of patients (36%) had ≥3 AE, with neutropenia and anemia being the most frequent, occurring in 20% and 14% of patients, respectively. One grade 5 AE was reported and was respiratory failure in the setting of pneumonia that the investigator deemed unrelated.

“Intermittent dosing is viable based on these data … teclistamab was manageable across all doses,” Usmani said.

Efficacy data at the 720 µg/kg dose are not yet mature, and the dose escalation and expansion phases of the trial are still ongoing, Usmani explained. Future findings could lay the groundwork for a promising new therapy for this patient population. 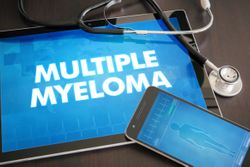