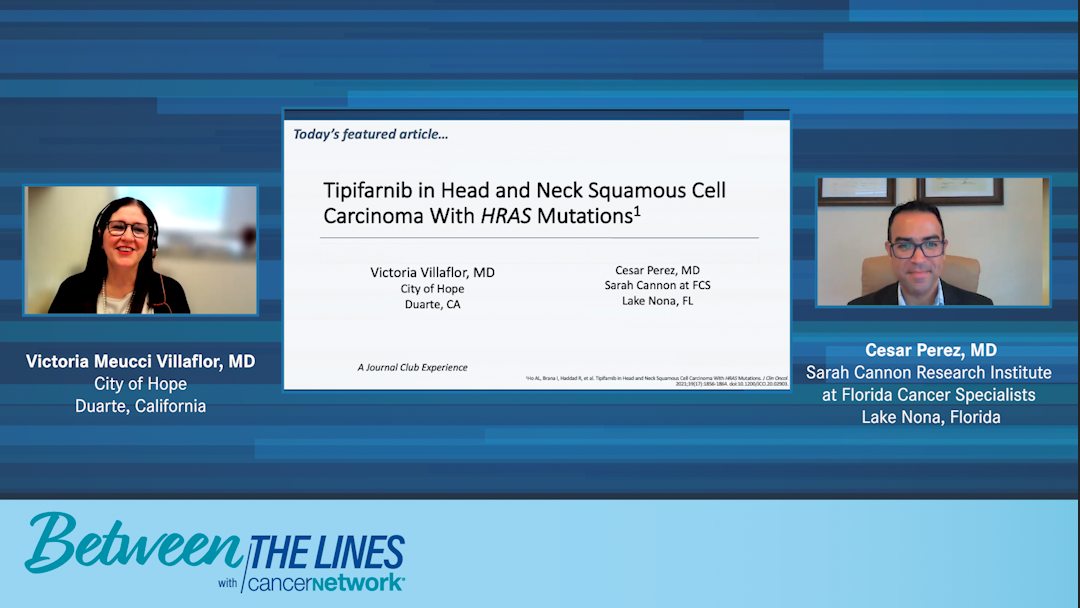 Victoria Meucci Villaflor, MD: Dr Perez, what do you think are some interesting questions that arose from this paper?

Cesar Perez, MD: There are many questions that you can have about the paper and its findings. For example, we believe HRAS mutations occur in 4% to 8% of patients with recurrent or metastatic head and neck squamous cell carcinoma, but how much of the 4% to 8% have a high variable allele frequency? They established the cutoff of 20%. This is a small population. What’s the correct cohort, or at least correct cutoff, that we’ll set for a cohort in a larger study? Is it 20% or 10%? It’s thought that 20% high variable allele frequency will probably include around two-thirds of all the patients with head and neck cancer. This hasn’t been confirmed in larger studies or a larger series, so that’s the main question: How many of these patients will be candidates for this drug if you take that cutoff?

There’s also another question. Obviously, we know head and neck cancer is 2 overlapping diseases. It’s more common in patients who are HPV [human papillomavirus]-negative with oral cavity [tumors]. There were patients who were HPV-positive who were included and actually had a response. Is there a difference between patients with HPV-related disease and patients who are HPV-negative? I don’t think anybody knows yet. With HRAS mutations and now with this specific finding, it should probably be a little more solid, so we won’t miss any patients who can benefit from the drug.

Victoria Meucci Villaflor, MD: In a small set, it made perfect sense to take the cutoff point of 20% or greater based on the interim subset analysis. As you go on, what are you going to do with a patient who has a variable allele frequency of 18%? Are you not going to give them this drug? What would happen with them? What are going to be the outcomes of those patients? That’s a great question you bring up. Is 20% an arbitrary number, or is it something that we have to adhere to? It’ll be interesting to see this in a larger study.

The other questions that I came up with include, why are these patients becoming resistant? That’s something that always lurks in the back of my brain. What’s going on? Is it something molecular? Is it another pathway that’s taking over and allowing the drug to no longer work in these patients? There are some patients who have a great response for a very prolonged period. Others have a great response for a short period. Some people just stabilize for either a long or short period.

I always like to scratch the surface and ask the next question, why? Because what’s next? What are we going to do for them? We’ve got them along this far, whether it be 3 months, 6 months, or 15 months, but is there something else that we’re going to be able to do for them down the road to maintain all of this? Are we going to understand this molecular pathway well enough to overcome resistance? Because resistance will happen with these drugs as they get further along in development.

Cesar Perez, MD: Regarding acquired resistance, the authors pointed out a very interesting manuscript from Germany from a couple of years ago. They noticed in that manuscript that there was an increased incidence of HRAS mutations after progression on cetuximab. This was noted by ctDNA, or circulating tumor DNA. I don’t think this had been studied very well, aside from that manuscript. If the incidence is just in tissue, can we detect this in ctDNA? Or as you mentioned, what happens with the tumor after they progress on tipifarnib? Can we repeat the ctDNA in those patients? We always do it in patients with EGFR and ALK mutations in non–small cell lung cancer. But we’re not usually doing a lot of ctDNA in patients with head and neck squamous cell carcinoma because we don’t find it very useful. But with these data, maybe we can now consider doing circulating tumor DNA to try to understand those mechanisms of resistance that you mentioned.

EFS Not Met With Pembrolizumab/Chemoradiation for Locally Advanced HNSCC