AACR: Results of THYME Trial Show the Time Is Not Right for AZD8931

The THYME trial testing AZD8931 in advanced HER2-low breast cancer failed to reach the primary endpoint of progression-free survival, according to results of the phase II trial presented at the 2013 AACR meeting in Washington, DC.

AZD8931 is a small molecule inhibitor capable of suppressing the activation of each of the three members of the epidermal growth factor family (HER1, HER2, and HER3) implicated in cancer. It had been shown previously to inhibit cancer cell proliferation and induce apoptosis in vitro. The rationale behind the study was that preclinical evidence showed that patients with low-level HER2-expressing tumors that would have been diagnosed HER2-negative in the clinic might benefit from anti-HER2 therapy. The THYME study sought to explore whether HER family inhibition in these cancers in combination with a standard paclitaxel regimen could produce greater efficacy than paclitaxel alone. The data from this study were presented by Jos Baselga, MD, PhD, physician-in-chief at Memorial Sloan-Kettering Cancer Center in New York.

One hundred and ninety patients were recruited into the two-phase trial; the first phase evaluated toxicity of AZD8931 in combination with paclitaxel, and the second phase consisted of a multicenter, randomized, double-blind, placebo-controlled study of the efficacy of paclitaxel with AZD8931 vs paclitaxel with placebo. The 190 patients were randomized across 48 sites in 14 countries. Patients were eligible if they had locally advanced or metastatic breast cancer and low amounts of HER2 expression. Hormone receptor-positive and hormone receptor-negative patients were eligible. The primary endpoint in the study was progression-free survival, and secondary endpoints were overall response rate, overall survival, biomarker evaluation, and safety.

Progression-free survival was found to be 8.7 months in the experimental arm vs 9.4 months in the placebo arm, indicating that, on the whole, the study failed to reach its primary endpoint. Dr. Baselga showed speculative evidence that certain subgroups of the treated patients saw some benefit from therapy, however. In particular, hormone receptor-negative cancers showed a trend toward response from AZD8931 with paclitaxel. A few patients saw tumor shrinkage in the study arm, and the overall survival data were regarded as immature but not likely to show any significant differences. “Patients that respond had a better [progression-free survival]…I think there’s a hint that something is happening,” noted Dr. Baselga. The main reason for discontinuation of each therapeutic arm was disease progression.

The most common adverse events were diarrhea, asthenia, and skin rash. AZD8931 did not enhance the toxicity of paclitaxel significantly through pharmacokinetic interactions, but a greater number of grade 3 diarrheas and rashes were noted in the combination arm. “There was a negative impact on quality of life in the experimental arm,” said Dr. Baselga. AZD8931 is being developed by AstraZeneca. 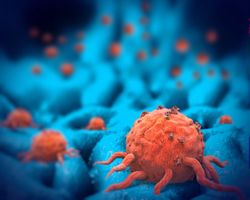