In recent years, health care providers have become increasingly concerned around the use of stereotactic radiation for lung cancers that are found near the center of a patient’s chest, according to an expert.

As a result, Anand Swaminath, MD, and colleagues, wanted not only to assess the efficacy, but also the safety of stereotactic body radiation in a group of patients with inoperable non-small cell lung cancer (NSCLC).

Swaminath, an associate professor, clinician scientist, and radiation oncologist at Juravinski Cancer Centre in Ontario, Canada, spoke with CancerNetwork® during the 2022 American Society for Radiation Oncology (ASTRO) Annual Meeting and discussed why they compared stereotactic body radiotherapy with a 3-week conventional hypofractionated radiotherapy regimen for patients with stage I medically inoperable NSCLC.

The standard of care right now for stage I lung cancer is to have surgery. But radiation is a suitable alternative to surgery, and a specific type of radiation called stereotactic body radiation therapy has been increasingly used, and it's cited even in guidelines as being a suitable alternative. However, there's not been clear randomized evidence that SBRT is more efficacious than using more conventional radiation, which is what we used 10 or 15 to 20 years ago. There are two smaller randomized trials, one from Australia and one from Scandinavia, that showed varied results. One trial showed a benefit to giving stereotactic radiation; the other trial showed no difference between stereotactic and conventional [radiation]. While that was all happening, in Canada, we started using a little bit more of an unconventional conventional radiation treatment, where we would shrink the course into 3 weeks of radiation, so it wasn't exactly stereotactic radiation. It wasn't more conventional radiation, which is usually delivered in 6 or 7 weeks; it was in 3 weeks. So, we thought it would be a good idea to compare those two regimens: the 3-week Canadian regimen vs a stereotactic regimen.

The second reason why we decided to do this trial was that in the other randomized trials, they only included patients that had peripherally-located lung cancer, so cancers in the periphery of the lung. When cancers come near to the center part of the chest—near the main bronchi, near the great vessels, or the mediastinum [center part of the chest]—there becomes more concern regarding toxicity and safety of using stereotactic radiation in those tumors. So, we felt that by doing this trial, we'd be able to answer the question of whether stereotactic radiation is not only effective, but also safe in treating both peripheral and central tumors. Those are the main rationales for why we decided to do this study. 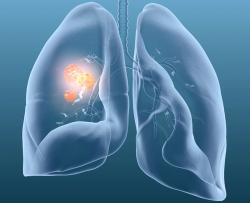