A new study evaluated whether the m7-FLIPI score in patients with follicular lymphoma treated with rituximab without chemotherapy can indicate prognosis.

The m7-FLIPI prognostic model stratifies patients into low-risk or high-risk categories with respect to 5-year failure-free survival after first-line immunochemotherapy,  a combination of rituximab, cyclophosphamide, doxorubicin, vincristine, and prednisone, or a combination of rituximab, cyclophosphamide, vincristine sulfate, and prednisone. The model integrates performance status, FLIPI score, and the mutation status of seven genes.

“The m7-FLIPI model was not prognostic in our smaller study population with FL patients receiving rituximab without chemotherapy,” wrote Sandra Lockmer, Karolinska Institutet, Solna, Sweden, and colleagues, in the study which was published in the British Journal of Haematology.

Lockmer and colleagues applied this score to 95 patients with sufficient tissue for testing taken from two randomized trials of single agent rituximab or rituximab with interferon-alfa2a. Testing was done with a targeted panel for genes EZH2, ARID1A, MEF2B, EP300, FOXO1, CREBBP, and CARD11.

No difference in time to treatment failure or overall survival was found between patients classified as low-risk or high-risk with the m7-FLIPI model. Among high-risk patients, 41.2% had not received therapy or died at 5 years; among low-risk patients, the number was 40.7%.

Those patients with EZH2 mutation did have significantly longer time to treatment failure on univariate analysis; however, this was no longer significant in an adjusted analysis. Among patients with mutated EZH2, the failure-free proportion at 5 years was 60.9% compared with 33.7% among unmutated patients.

More surprisingly, according to the researchers, those patients with EP300 mutations had a significantly shorter time to treatment failure both in univariate and adjusted analysis. Among patients with mutated EP300, the failure-free proportion after 5 years was 14.3% compared with 45% in unmutated patients.

“Clearly, the interaction between separate mutations and how, in combination, they relate to other tumor and patient characteristics, is a complex and largely unknown process,” the researchers wrote.

Based on the results, they concluded “that prognostic factors may have different significance when applied in a context of first-line treatment with immunotherapy instead of immunochemotherapy. Whether similar conclusions can be drawn in the context of novel drugs, such as immunomodulators and checkpoint inhibitors, remains to be shown.” 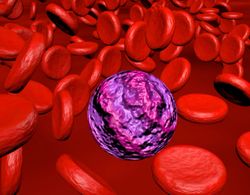