Decision Making in Selecting Treatment in HER2+ BC

Experts provide insights on clinical decision-making in the setting of patient with HER2+ breast cancer.

Adam Brufsky, MD, PhD: I’m really curious why the FDA allowed that second-line label, but here it is. You do the MRI. She’s got 2 lesions in the brain, each 1 cm. You decide you are not going to take them out. Your choices are giving THP [docetaxel, trastuzumab, pertuzumab]; T-DM1 [trastuzumab emtansine]; trastuzumab deruxtecan; tucatinib, trastuzumab, and capecitabine; and other, which could be the ASCO [American Society of Clinical Oncology] board’s question, which is basically SRS [stereotactic radiosurgery] for the lesions and maybe rechallenge or do what you were doing before. What do you think, guys? Let’s start with Neil. What would you do in this case?

Neil Iyengar, MD: I’d move toward reaching for the tucatinib-based regimen in this kind of setting. It’s reasonable to consider what you just mentioned, Adam, with regard to local therapy to the CNS [central nervous system] and then rechallenging or even continuing whatever treatment the patient may have been on, barring any systemic progression. But I have been fairly impressed by the combination of the systemic and CNS activity of the tucatinib-based regimen, so this is the kind of setting where I would now change treatment to tucatinib.

Adam Brufsky, MD, PhD: Sara, what are your thoughts?

Sara A. Hurvitz, MD: I agree. It makes sense here, and the data from the HER2CLIMB trial are really compelling about the CNS benefits of it.

Adam Brufsky, MD, PhD: VK, what are your thoughts?

Vijayakrishna Gadi, MD, PhD: Similar answer. Obviously, we have a lot of shared decision-making around all of these choices. I might recommend the tucatinib-based regimen, specifically because of the ability to control these active brain metastases and prevent additional ones from occurring in the brain, which is very compelling for me. But if a patient says, "Doctor, I’m not ready to take 17 pills a day, and I can’t get insurance to cover it," it’s important for us to talk about a simple 1-drug regimen like T-DM1 [trastuzumab emtansine] following SRS and then watching these patients like a hawk. I don’t think that’s a wrong choice. I’m going to pick the board’s answer, which is No. 4 [tucatinib, trastuzumab, capecitabine] here. But there are going to be patients who are going to go for T-DM1 [trastuzumab emtansine] when counseled about SRS and this as an option.

Adam Brufsky, MD, PhD: I want to talk about 2 more things. We’re going a little over, but we’ll catch up. The first question is: Would you give this person SRS first and then use No. 4? Or would you just give this without the SRS, based on the fact that about one-third of the patients were untreated in HER2CLIMB? Sara, let me start with you. Would you do without the SRS?

Sara A. Hurvitz, MD: I’d do without the SRS. You have a limited number of times you can radiate, even with highly directed radiation, and I’d rather use systemic therapy and watch very closely and then pivot to SRS if there’s progression.

Neil Iyengar, MD: Same thing. In the CNS data—the response rate, PFS [progression-free survival], and OS [overall survival]—there were benefits in all parameters. You see tumor volume reduction with this approach without local therapy. I agree. I would save the radiation for later.

Adam Brufsky, MD, PhD: I have 1 last question. I’ll start with VK and go around. I’ve noticed, having been using this for 6 to 8 months, that I’m finding a little more hand-foot syndrome in particular. I’m really having to dose reduce the capecitabine, and in some cases, the tucatinib. Are you guys finding that in your practice? I know it was about a 20% dose reduction in the trial, but the degree of hand-foot syndrome has really surprised me. I had people who were on capecitabine and trastuzumab and didn’t have a problem. Then I put them on the same thing, but I added tucatinib, and they had really bad hand-foot syndrome. Have you guys seen that at all in your practice? I’m curious.

Vijayakrishna Gadi, MD, PhD: It’s interesting. I practiced in Seattle and now I practice in Chicago, and in terms of the demographics of the patients, the big difference for me is I now have a lot more African American patients. Obviously, capecitabine toxicity, for a variety of reasons, is more apparent in the Black population. I’m seeing more hand-foot syndrome than I did on the study, but I think that’s partly because my patient base and population changed. I suspect that you’re seeing a slightly different racial or ethnic mix in Pittsburgh than was on the HER2CLIMB study as the parent study. Maybe that’s another reason why you’re experiencing that toxicity. I haven’t noticed that it’s any worse because I added tucatinib. I haven’t seen that, but I certainly do see more hand-foot syndrome than I saw on the study.

Adam Brufsky, MD, PhD: It may just be anecdotal. That’s why I’m asking people when I have these sorts of things. Sara, is it the same thing? Are you seeing any worse hand-foot syndrome than most people thought?

Sara A. Hurvitz, MD: No, but I’m really conservative when it comes to capecitabine. I usually don’t start it the way they did in HER2CLIMB. I usually start at a flat 1000 mg BID [twice daily] and then go up or down to goal. I run into trouble if I start at the target and then have to come down. It seems to scare patients off and create problems, so I always start low. It’s kind of a dose-escalation strategy like we use with neratinib in the adjuvant setting.

Adam Brufsky, MD, PhD: Neil, do you have any other comments on this? Do you see it there?

Neil Iyengar, MD: I’m just curious if you’re seeing it perhaps later on. Does this develop because patients are staying on the regimen longer?

Adam Brufsky, MD, PhD: No. Literally, I had 4 or 5 people in maybe a 3-week period. My nurse practitioners came to me and said, "Adam, what’s going on? Are we giving them too much capecitabine? Is the dose wrong or something?” And it wasn’t. We checked the capecitabine dose. It was really weird. It hasn’t happened since, so I don’t know what’s going on. That’s why I’m asking people this question.

Neil Iyengar, MD: That’s interesting. I’ll say something controversial. With the capecitabine dosing, I now often use the 7-7 [7 days on, 7 days off] dosing schedule, even though that was not what was used in HER2CLIMB. I’ve had a fair amount of success with that.

Adam Brufsky, MD, PhD: Eventually, we’ll have real-world data from Flatiron [Health] or somewhere else to help us figure it out. There will be enough people treated that way that we will probably get some data on it. 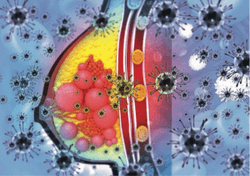