Developments in the Treatment of Gastric Cancer in Europe

Metastatic gastric cancer is a relatively chemosensitive disease. With current regimens, 25% to 40% of patients can be expected to respond, and median survival of 6 to 8 months is

ABSTRACT: Metastatic gastric cancer is a relatively chemosensitive disease. With current regimens, 25% to 40% of patients can be expected to respond, and median survival of 6 to 8 months is achievable. These outcomes may be improved by the use of infusional fluorouracil (5-FU) in combination with cisplatin (Platinol) or the newer agents docetaxel (Taxotere) and irinotecan (Camptosar). Phase II studies using these approaches have reported response rates of 50% to 60% and median survival of 11 months. Chemotherapy may also have a role in earlier stages of gastric cancer. However, the value of adjuvant therapy in improving survival following successful resection has still to be demonstrated, as has the survival benefit of preoperative treatment. Nevertheless, primary chemotherapy has demonstrated a capacity to downstage disease in certain otherwise inoperable cases. [ONCOLOGY 14(Suppl 14):22-25, 2000]

The majority of stage IB and II disease and certain stage III gastric cancers are resectable. However, even in patients who have undergone potentially curative surgery, 5-year survival is low. Additionally, many patients present with metastatic disease at first diagnosis, with a 5-year survival rate of less than 10%.[3,4] Studies have failed to demonstrate consistently that outcome can be improved by more radical surgery.[5,6] The poor long-term survival, even of resected patients, indicates the urgent need for multimodality therapy in early disease. However, as with other tumor types, new treatment regimens should first be assessed in the setting of advanced disease.

Quality of life was improved by chemotherapy in the trial by Glimelius et al.[8] In that study, the 8-month median survival of 31 patients receiving etoposide/leucovorin/5-FU (ELF) was, statistically, not significantly longer than the 5-month survival of controls (P = .12), but was statistically significant using a multivariate analysis (P = .003). However, the relatively modest difference in survival outcome may have been influenced by the fact that control patients who did not obtain adequate palliation with supportive care alone were allowed to receive chemotherapy. The benefit of chemotherapy over best supportive care in the treatment of gastric cancer was demonstrated by these studies.

Current data do not support a single-standard chemotherapy approach for the treatment of advanced gastric cancer. Nevertheless, certain regimens have been proven superior to others.

In a study in which 208 patients were randomized, Wils et al for the European Organization for Research and Treatment of Cancer (EORTC)[10] demonstrated that FAMTX was superior to 5-FU, doxorubicin, and mitomycin (FAM) in terms of response rate (41% vs 9%, P < .0001) and median survival (9.7 vs 6.7 months, P < .004). At 1 year, only 22% of patients treated with FAM were alive, whereas 41% of those who had received FAMTX survived. The results of this study and four other comparisons between regimens are shown in Table 1.

Very promising results with the EAP regimen (etoposide/doxorubicin/cisplatin [Platinol]) have been reported in patients with locally advanced and unresectable tumors,[11] with the complete response rate (21%) indicating a high level of antineoplastic activity. The group from the Memorial Sloan-Kettering Cancer Center compared FAMTX with EAP in patients with metastases from gastric cancer.[12] Because of the high rate of severe side effects associated with the EAP regimen, the study was closed prematurely. It is noteworthy that FAMTX appeared to be at least equivalent in respect to the rate of objective responses and median survival in this group of patients.

A regimen of etoposide and 5-FU modulated by leucovorin (ELF) was developed in elderly patients or individuals not fit for treatment with anthracyclines because of underlying cardiac disease and demonstrated a 41% response rate and a 10.5-month median survival.[13] The combination of cisplatin plus 5-FU given as a 5-day infusion induced objective responses in 43% of patients, with a median survival of 9 months.[14] The EORTC Gastrointestinal Cancer Cooperative Group therefore initiated the randomized comparison of FAMTX as reference treatment vs ELF or cisplatin/5-FU. Unfortunately, the high activity of FAMTX could not be reproduced in this trial. Although neither of the other two regimens proved to be superior to FAMTX, the cisplatin/5-FU arm appeared to be the one with the highest response rate without being statistically significant.[15]

While no regimen is recognized as the standard treatment for gastric cancer, those containing infusional 5-FU combined with cisplatin are felt to be acceptable because of their high antineoplastic activity and manageable toxicity.

Wilke et al[16] conducted a phase II trial in 83 patients who received a 24-hour infusion of 5-FU, 2,000 mg/m2, plus bolus folinic acid, 500 mg/m2, weekly for six cycles, while also being administered cisplatin, 50 mg/m2, every 2 weeks for three cycles. Treatment cycles were repeated after 8 weeks. A complete response rate of 6% and a partial response rate of 40% combined for an overall response rate of 46%. The median survival was 11 months, and median time to progression was 7 months.

Interest in infusional 5-FU has been reinforced by data from the Royal Marsden Hospital demonstrating that epirubicin/cisplatin/5-FU (ECF) was superior to FAMTX in response rate (45% vs 21%) and survival (8.9 vs 5.7 months) in 256 eligible patients.[17,18] The activity of the ECF regimen was confirmed in a recent randomized trial including over 500 patients in which epirubicin was replaced by mitomycin-C (Mutamycin).[19] The response rate was approximately 40%, and median survival was 9.4 or 8.8 months, respectively. While the role of infusional 5-FU in combination with cisplatin appears to be confirmed, the contribution of either mitomycin-C or epirubicin remains questionable. (See Table 2.)

In addition to the revival of interest in 5-FU used in either weekly high-dose infusion or protracted infusion, recent years have seen the emergence of oral fluoropyrimidines (UFT [uracil plus tegafur], capecitabine [Xeloda], and S-1) and entirely novel agents such as the taxanes and the topoisomerase I inhibitor irinotecan (Camptosar, CPT-11).

Irinotecan has been shown to be a promising drug. In Japan, irinotecan at 100 mg/m2 every week or 150 mg/m2 every 2 weeks, was assessed in 81 patients suffering from advanced gastric cancer. Seventy-six evaluable patients with a median age of 59 years were included in this trial. The male-to-female ratio was 74%:26%. Sixty-four percent of patients had a good performance status. Fifty-six patients had received prior therapy. The response rate was 23.3% (95% confidence interval: 13% to 34%) (Table 3)[22] for the whole group and 20% for pretreated patients.

Also studying irinotecan, KÃ¶hne et al[23,24] reported "a response rate of 18% in a confirmatory phase II trial conducted in Germany and Israel." More recently, Enzinger et al[25] reported an objective response rate of 15% among 34 patients with advanced esophageal and gastric adenocarcinoma enrolled in a phase II trial of irinotecan at 125 mg/m2 in cycles of four weekly treatments followed by 2 weeks of rest.

Because these new agents were shown to be active as single agents in the treatment of gastric cancer, the next logical step was to assess their activity in combination with other active agents or regimens.

The therapeutic value of docetaxel and/or irinotecan is currently being investigated in several randomized trials in which either high-dose infusional 5-FU or cisplatin is combined with the new agents. These trials will provide important information and will hopefully broaden the treatment possibilities for our patients.

The therapeutic value of the oral fluoropyrimidines needs to be further evaluated. Their activity as single agents has been promising and they may prove to be useful in combination with irinotecan or the taxanes. However, whether they can replace infusional 5-FU (which needs portable pumps attached to an implanted, permanent venous device) needs to be demonstrated.

Considerable effort has been undertaken in comparing and refining treatment regimens and schedules, following the demonstration that chemotherapy improves survival and quality of life in metastatic gastric cancer when compared with supportive care alone. More active drugs and drug combinations hold promise for improved palliation and extension of survival not only in advanced disease, but also in the potentially curative adjuvant and preoperative settings. Among the newer agents, docetaxel and irinotecan have demonstrated high activity with manageable toxicity as single agents and in combination regimens. Numerous studies with these new agents are ongoing and results that will define their role in the treatment of gastric cancer are awaited.

Evidence for efficacy in preoperative phase II trials is forthcoming. However, data from phase III trials involving a significant number of patients are lacking, and the role of adjuvant treatment after complete resection is not defined. The risk of relapse in patients with gastric cancer is even higher than among patients with breast or colorectal cancer in which adjuvant treatment is an established treatment option. Given this fact, it is puzzling that no benefit of adjuvant chemotherapy has yet been demonstrated. 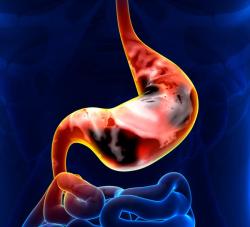