MIAMI BEACH-Chronic inflammation due to Helicobacter pylori infection is the “underlying disease” that causes some gastric lymphomas, and curing the infection produces durable remissions of the neoplasms, Andreas Neubauer, MD, said at the American Society of Hematology (ASH) annual meeting.

MIAMI BEACHChronic inflammation due to Helicobacter pylori infection is the underlying disease that causes some gastric lymphomas, and curing the infection produces durable remissions of the neoplasms, Andreas Neubauer, MD, said at the American Society of Hematology (ASH) annual meeting.

Dr. Neubauer and colleagues at the Carl Gustav Carus University Clinic, Dresden, Germany, reported long-term follow-up data on 120 patients with low-grade gastric mucosal-associated lymphoid tissue (MALT) lymphomas. After antibiotic treatment to eradicate H pylori, 79% had a complete remission, and 10% had a partial remission. Dr. Neubauer warned that nonresponders should be carefully worked up to rule out aggressive lymphomas.

Many groups have shown that cure of H pylori infection is associated with high remission rates in limited stages of low-grade gastric MALT lymphomas, said Dr. Neubauer, who is now chair of the Department of Hematology-Oncology, University of Marburg.

Because there was some question about the durability of these remissions, Dr. Neubauers group extended their previous report of 50 patients to include 120 patients with low-grade gastric MALT lymphoma in stage EI. Median tumor size was 3 cm (range, 0 to 10 cm). (The patient with the largest tumor was one of those who had a complete response after treatment, he noted.)

Patients were treated with a 2-week regimen of amoxicillin (2,250 mg/day) and omeprazole (Prilosec) (120 mg/day). Dr. Neubauer said that this eradicated H pylori in 97% of patients; in the remaining 3%, the infection was eradicated with further three-drug therapy.

In response to questions about tolerability, he said that not all patients received the full 120 mg/day of omeprazole and that, in later usage, the omeprazole dose was reduced to 80 mg/day.

At the time of follow-up, there had been nine relapses among the 95 complete responders and four deaths, but none from cancer. Dr. Neubauer said that one of these patients relapsed with a high-grade lymphoma but had a second complete response after additional treatment.

Remission can be induced in the majority of patients who have low-grade gastric MALT lymphomas in stage E1 by eradication of the underlying H pylori infection. Remissions seem to be stable, but relapses do occasionally occur and can be high grade, Dr. Neubauer said. He also emphasized that the selection of patients for this trial was extremely strict and limited to those patients with stage E1 disease. 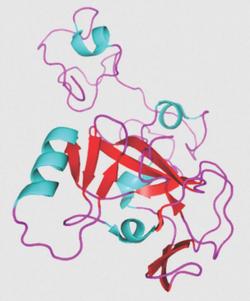 Expert Commentary on the Product Profile of Umbralisib for Lymphoma