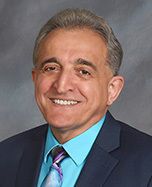 In this case, we examine a 49-year-old man with widespread metastatic sclerotic bone lesions. What is your diagnosis?

A 49-year-old Caucasian man with back, rib, hip, and leg pain that has persisted for several months presents to the emergency department with severe right hip pain. He reports that he heard a popping noise and felt a sudden, sharp, severe pain in his right hip joint when he tried to stand up from the toilet seat. An initial plain x-ray revealed a right femoral intertrochanteric/neck fracture and sclerotic appearance of the proximal femur. Further workup with 3-view x-rays of the lumbar spine demonstrated lytic lesions throughout the bony structures, suggesting metastatic disease. The patient was admitted to the hospital and underwent internal fixation of the femur.

On physical examination, decreased motor function in both the upper and lower (more pronounced on the lower) extremities was noted. Blood work was obtained and was significant for anemia, leukopenia, and thrombocytopenia (white blood cell count, 3.9 × 103 µl; hemoglobin level, 7.8 g/dL; platelet count, 77 × 109 L), with a normal peripheral differential. Levels of alkaline phosphatase and lactic acid dehydrogenase, as well as the erythrocyte sedimentation rate, were elevated, at 578.0 mm/h, 488.0 mm/h, and 50.0 mm/h, respectively. Renal function was normal. The total protein level was 6.6 g/dL, and the albumin level was 3.7 g/dL. Tumor markers were ordered.

CT scans of the chest, abdomen, and pelvis revealed multiple osteolytic bony lesions in nearly all the bony structures, along with bulky retroperitoneal and iliac chain lymphadenopathy (Figure 1). An MRI of the spine confirmed multilevel spinal metastases and extradural spinal masses at the T5 and L3 levels, causing severe spinal stenosis. A surgical specimen from an internal fixation operation was sent to pathology.

Soon after internal fixation of his femur fracture, the patient developed further loss of motor strength in all four extremities. While waiting for pathology results of the surgical specimen, the result of his serum prostate-specific antigen (PSA) test came back, at 8,972 ng/mL. Blood work for coagulation tests was performed in contemplation of spinal decompression surgery, revealing abnormal coagulation parameters consistent with early disseminated intravascular coagulation (DIC).

The patient was started on degarelix with close monitoring of his neurologic symptoms and coagulation parameters. Within 48 hours of the degarelix injection, his PSA level decreased to 650 ng/mL, and his coagulation test results normalized. He underwent spinal decompression surgery at the T5 and L3 levels, without major complications. Physical therapy was initiated as tolerated. Four weeks after admission, the patient was discharged to the rehabilitation unit to continue physical therapy and recovery from his hip surgery. He regained full upper extremity function and 80% of his lower extremity function.

What is the patient’s diagnosis?

This 49-year-old, otherwise healthy, man presented with high-volume metastatic hormone-sensitive prostate cancer. In addition to bulky retroperitoneal lymphadenopathy, his widespread osteolytic bony metastatic disease was concerning for early spinal cord compression, the signs and symptoms of which occurred soon after his hospitalization. Blood work revealed early findings of DIC. While bulky retroperitoneal lymphadenopathy and lytic bone metastases made the initial differential diagnosis challenging, the early finding in his blood work of a very high PSA level of 8,972 ng/mL led to a quick diagnosis of metastatic prostate cancer. This diagnosis was later confirmed by the pathology of the surgical specimen (Figure 2).

Based on the early signs of spinal cord compression in this case, immediate androgen deprivation therapy (ADT) without any testosterone flare was critical. Thus, administration of a luteinizing hormone-releasing hormone (LHRH) antagonist was an appropriate first step. While orchiectomy may otherwise have been a reasonable approach, the patient’s early DIC picture and low platelet count rendered this option less favorable. Similarly, spinal decompression surgery would not be possible without reversal of DIC blood picture. DIC is the most frequent coagulation disorder in patients with prostate cancer. It may occur as a result of the introduction of thromboplastic substances into the bloodstream after a biopsy of the primary tumor or a metastatic site; as in the case presented here, it may also develop as a manifestation of advanced disease.[1] Optimal management of DIC associated with prostate cancer requires treatment of the underlying prostate cancer, in combination with supportive measures to control the abnormal coagulation. Within 48 hours of the start of ADT, the patient’s DIC picture improved enough that he was able to undergo spinal decompression surgery.

Of note, this patient presented with diffuse osteolytic metastases. A widely metastatic osteolytic presentation as in this case requires a thorough evaluation to rule out other malignancies, including multiple myeloma, lymphoma, and solid tumors such as urothelial cancer or breast cancer. An early diagnosis based on a highly elevated PSA level is very helpful. Recent research studies have focused on the pathogenesis of bone metastases to identify potential targets for therapeutic interventions. Metastatic tumor cells from various cancers in the bone dysregulate the coordinated relationship between osteoclastic and osteoblastic functions, promoting tumor cell proliferation while causing bone destruction aided by various cytokines and growth factors. The pathologic dominance of different cytokines determines the common radiographic pattern of bone lesions, which may vary from predominantly osteolytic, as commonly seen in breast cancer and multiple myeloma, to predominantly osteoblastic, as commonly seen in prostate cancer. On radiographs, the bone metastases from prostate cancer typically have the characteristic osteoblastic appearance.

Diffuse osteolytic metastases from prostate cancer, as seen in this case, are quite rare, with few cases reported in the literature.[2,3] Prostate cancer cells promote both osteoblastic and osteolytic activity through production of factors that have direct or indirect osteogenic properties.[4] Factors such as bone morphogenetic proteins, endothelin 1, PSA, and parathyroid hormone-related protein promote osteoblastic activity. The receptor activator of nuclear factor kappa-B ligand (RANKL)-and its receptor, RANK-promote osteoclastic activity, while osteoprotegerin (OPG) protects the skeleton from excessive bone resorption by binding to RANKL and preventing it from binding to RANK.[5] Prostate cancer cells express both OPG and RANKL.[6] The RANKL-to-OPG ratio determines bone mass, with a decrease in OPG resulting in excessive bone resorption. It is possible that, in some patients with predominantly osteolytic bone lesions, the RANKL-to-OPG balance is altered, resulting in the appearance of osteolytic bone lesions, as seen in this case.

Docetaxel is included as an upfront treatment option for men with metastatic hormone-sensitive prostate cancer based on the results of two phase III trials.[7,8] The survival benefit of this agent is more pronounced in patients with high-volume disease, as shown in the subgroup analyses of these trials. In this case, adding 6 cycles of docetaxel to continued ADT would be appropriate since the patient has high-volume metastatic hormone-sensitive prostate cancer. Previous studies have reported that LHRH agonists and LHRH antagonists are generally well tolerated, with the exception of reactions at the injection site with LHRH antagonists; most adverse events that do occur are consistent with androgen suppression or the underlying condition. Some insurance plans may prefer leuprolide due to its reduced cost. Since some evidence on the efficacy, safety, and potential cost savings of switching from an LHRH antagonist to an LHRH agonist has been reported,[9,10] switching from degarelix to leuprolide plus bicalutamide would be a reasonable option for this patient.

After a month of degarelix, the patient’s PSA level decreased to 52.0 ng/mL. Following the addition of docetaxel, his PSA level went down to 0.5 ng/mL within 2 months. He is currently on his fourth cycle of docetaxel, and his PSA level is 0.2 ng/dL. He is able to walk with a walker and continues physical therapy at home.

9. VisapÃ¤Ã¤ H. Switching from an LHRH antagonist to an LHRH agonist: a case report of 10 Finnish patients with advanced prostate cancer. Oncol Ther. 2017;5:119-23.

Metastatic CSPC: Is There a Continued Role for Docetaxel in the Frontline Setting?