The objective response rate (ORR) in the entire treated patient population (N = 62) was 75.8% with a rate of complete response (CR) or greater of 38.7%. All 15 patients who achieved a CR or greater and had bone marrow evaluable for minimal residual disease (MRD) demonstrated MRD negativity by next-generation sequencing.

“Patients with myeloma who have been treated with the 3 main backbones of interventional therapy—proteasome inhibitors [PIs], IMiDs [immunomodulatory drugs], and monoclonal antibodies—have poor outcomes to subsequent treatment. This includes a median PFS [progression-free survival] seen to date of less than 6 months and a median OS [overall survival] of less than 1 year,” Yi Lin, MD, PhD, said during a presentation at the 62nd American Society of Hematology (ASH) Annual Meeting and Exposition. “With longer follow-up, we are continuing to see a deep response with ide-cel in this heavily pretreated myeloma patient population.”

Ide-cel is manufactured from patients T cells using a lentiviral construct, which encodes a CAR specific for human B-cell maturation antigen (BCMA) with a 4-1BB costimulatory domain and a CD3V T-cell activation domain. Lin, who is an assistant professor of oncology and medicine at the Mayo Clinic in Rochester, Minnesota, noted that manufacturing success was 100% on this study.

Following leukapheresis, patients received fludarabine 30 mg/m2 plus cyclophosphamide 300 mg/m2 on days –5 to –3 prior to CAR T-cell infusion. In the dose-escalation portion of the study, patients with 3 or more prior lines of therapy (n = 21), including a PI and an IMiD, were administered between 50 × 106 and up to 800 × 106 CAR-positive T cells. In the dose-expansion portion, additional patients were administered 150 × 106 (n = 12) or 450 × 106 (n = 29) CAR-positive T cells. The criteria for inclusion in the dose-expansion phase included having 3 or more prior lines of therapy, including a PI, IMiD, and daratumumab (Darzalex), and being refractory to the last line of therapy. As of the median follow-up of 18.1 months, 11 patients (17.7%) were still ongoing on the study.

DOR was assessed based on poor prognostic factors with investigators reporting no correlation between factors such as increased age, high Revised International Staging System stage, extramedullary plasmacytoma, or the receipt of bridging therapy and DOR.

Lin reported that ide-cel expansion appeared to peak within the first month of administration and remained persistent and detectable many months after infusion. For those reaching a CR or better, peak expansion of CAR T cells was higher than in those who did not.

Patient baseline characteristics revealed a heavily pretreated population with 6 median prior lines of therapy (range, 3-18), close to 70% of whom were refractory to PIs, IMiDs, and anti-CD38 monoclonal antibodies. High-risk cytogenetics were present in 27.4% of patients and extramedullary disease was recorded in 37.1%. About half (51.6%) of these patients required bridging therapy during manufacturing of CAR T-cell therapy. The median age of all patients was 61 years (range, 37-75) and the majority had an ECOG performance status of 1 (71.0%).

One death (1.6%) within 8 weeks of CAR T-cell infusion was reported in a patient who had grade 2 cytokine release syndrome (CRS) events on days 1 and 8, resolving on days 4 and 12, respectively. The patient was found to have a minimal response by IMWG criteria at month 1 and had persistent cytopenia requiring transfusions. The patient withdrew from the study and died in hospice of unknown cause at day 51. Seven more deaths (11.3%) occurred within 6 months of CAR T-cell infusion, 6 of which were due to myeloma progression and 1 due to cardiopulmonary arrest that was determined to not be treatment related.

In general, increased ide-cel doses were associated with higher rates of CRS. However, the majority of cases were mild, with only 6.5% of patients having grade 3 events. The median time to first onset of CRS was 2 days (range, 1-19) and the median duration was 5 days (range, 1-32). Tocilizumab (29.0%) and corticosteroid (16.1%) rates were relatively low for management of CRS in this population.

“These results so far are comparable to those results reported by [Nikhil C. Munshi, MD,] at ASCO [American Society of Clinical Oncology Virtual Scientific Program] earlier this year of the pivotal trial of KarMMa [NCT03361748] in this patient population,” said Lin.

Ide-cel is also being explored in multiple other studies, including the phase 3 randomized trial versus standard regimens in patients who are triple-class exposed with between 2 and 4 prior lines of therapy (KarMMa-3; NCT03651128). 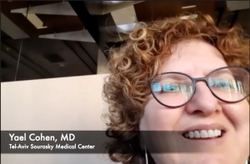 Yael Cohen, MD, on Background for and Key Findings from the Updated CARTITUDE-2 Trial With Cilta-Cel in Refractory Myeloma