How to Treat Metastatic Malignant Triton Tumor in an Adolescent

A systematic review of reported clinical cases and treatment strategies was performed to better understand the prognostic factors and to develop the best possible treatment option for a 16-year-old patient diagnosed with a malignant triton tumor in the lower extremity with distant metastases in the lungs.

Malignant triton tumor (MTT) is a rare, highly aggressive disease having poor prognosis, and for which no standardized treatment guidelines exist. A 16-year-old patient was diagnosed with MTT in the lower extremity with distant metastases in the lungs. The enlarged tumor and multiple metastatic lesions limited the efficacy of the treatment, which involved surgery followed by adjuvant therapy. A systematic review of reported MTT clinical cases and treatment strategies was performed to better understand the prognostic factors and to develop the best possible treatment option. The treatment approach selected was based on a combination of neoadjuvant chemotherapy, including ifosfamide/doxorubicin, followed by a complete resection of the tumor, and supported by adjuvant and/or postoperative radiation therapy with a dosage of 40 to 70 Gy. This strategy was selected to decrease the risk of MTT recurrence and of metastases formation, thereby improving the prognosis and outcome.

A 16-year-old boy presented with cough and dyspnea that had lasted for 1 month. He had no prior medical history, was a nonsmoker, and did not consume alcohol. Diagnostic work-up, including a CT scan, was performed. Imaging revealed an enlarged 4.6-cm inguinal lymph node, forming a very large, nonhomogeneous cystic mass measuring 15.7 cm, infiltrating several muscles: the adductor longus, adductor brevis, sartorius, and adductor minimus (Figure 1A, B). Multiple metastatic lesions in both lungs (measuring between 0.6 and 2.5 cm each) and right pleural effusion were detected (Figure 1C, D). Biopsy of the lymph node with further histology and immunohistochemistry (IHC) were performed. The tumor was described to have pleomorphic spindle malignant cells, between which there were rhabdoid cells (Figure 2). IHC stains were positive for S100, SMA, SOX10, and vimentin, and desmin was positive in rhabdomyosarcomatous elements; the loss of H3K27me3 expression in 30% of tumor cells was observed (Figure 3). The Ki67 stain demonstrated proliferative activity of 45% to 50% (Figure 3). Based on the histological and IHC examinations, malignant triton tumor (MTT) was diagnosed.

Which treatment strategy for MTT would be most effective and provide the best possible prognosis in this case?

Malignant peripheral nerve sheath tumor (MPNST), also known as malignant schwannoma or neurogenic sarcoma, is a rare form of soft tissue sarcoma (STS) that develops from Schwann cells or pluripotent cells of the neural crest, constituting peripheral nerve branches or sheaths of peripheral nerve fibers.1 MPNST represents approximately 5% of all STS.2 In turn, MTT is a histological subtype of MPNST, in which malignant Schwann cells coexist with malignant rhabdomyoblasts.2,3 MTT accounts for less than 10% of MPNST.4,5 MTT is a highly aggressive tumor that most often affects patients aged less than 35 years, although it is very rare in pediatric patients.6 The prognosis is poor; 5-year survival rate among children ranges between 5% and 20%.2 The disease occurs equally among males and females.7 MTT may originate in different parts of the body, affecting extremities, head, neck, or trunk. In 2020, Panagiotis Tsagozis, MD, PhD, and colleagues reported that poor prognosis was expected when primary tumors were located in the trunk and extremities; however, in 2021, Rafael Bittencourt Bins, PhD, argued that the prognosis was better when MTT affected the extremities, head, or neck.6,8 These contradictory opinions might be associated with either local recurrence or a high rate of metastatic disease.9,10

As MTT is a rare subtype of STS, all reports regarding MTT recommend treatment options developed for STS. They suggest several approaches, including complete surgical excision and/or the adjuvant use of radiotherapy and chemotherapy, similar to treatment plans used for STS; chemotherapy may include doxorubicin, ifosfamide, cyclophosphamide and vincristine.6,7,11-13 As reports of MTT treatment are scarce, these recommendations are based on limited evidence. As such, it is very difficult to achieve an evidence-based consensus on the treatment of MTT. In the absence of clear guidelines, the evaluation of MTT prognosis and treatment options can rely only on the limited data available in the literature.

The surgical excision of MTT is important to achieve better outcomes and is often suggested as an MTT treatment option.5,8 Both the disease prognosis and actual outcome depend on the degree of tumor resection. Patients whose surgical margins are at least 1 mm in size, corresponding to R0 resection in the R1 classification, have a higher survival rate compared with those whose resection margins are less than 1 mm.8 Unfortunately, surgery with complete excision is rarely feasible for tumors larger than 5 cm and/or with multiple metastases. Despite the fact that extended surgical resection of the tumor site is the most important factor in improving local control and outcome in patients with MTT in their extremities, head, neck, and trunk, surgical resection alone, without chemotherapy and/or radiotherapy, does not guarantee a good prognosis.11 Even after radical resection, local recurrence or distant metastases develop in a considerable number of patients with MTT, resulting in an unfavorable prognosis.

The analysis of existing data has shown that, among children with MTT who were treated only with surgery, 75% died from the disease within 10 days to 15 months. No information about the rest of the patients is available.7,11 In short, even though surgery is the mainstay for treating localized tumors, complete surgical resection is not possible for large and/or metastatic MTT. Therefore, answer A is incorrect.

MTT is currently treated as a form of STS. In addition to surgery, radiotherapy and chemotherapy are also often used to treat STS. Using chemotherapy alone to treat STS generates poor results, so this strategy remains controversial in treating MTT.14 Patients with advanced or metastatic MTT who received chemotherapy without surgery experienced disease progression. Whereas chemotherapy can have better effect as a part of combination therapy, as a single treatment modality it is not recommended for metastatic MTT; therefore, answer B is incorrect.

If MTT has metastasized and is primarily unresectable, different therapies must be combined to enhance local control and pain control. Chemotherapy is often offered as an option for curative treatment for MTT and for palliative care.6

Only 1 clinical case that successfully avoided surgery is reported in the literature: A child enrolled in clinical study was cured through VDC/IE chemotherapy (vincristine, 2 mg/m2 on day 1; cyclophosphamide, 1200 mg/m2 on day 1; doxorubicin, 75 mg/m2 on days 1 and 2; ifosfamide, 1800 mg/m2 on days 1-5; etoposide, 100 mg/m2 on days 1-5) in combination with radiation therapy at a dose of 70.2 Gy in week 12.15 The patient then received high-dose chemotherapy with thiotepa and carboplatin, followed by autologous stem cell transplantation. By the end of the treatment, the primary tumor had decreased in size by 85%. Forty-three months after diagnosis, the child was still in remission.15 However, this is the only case report available noting successful treatment without surgical resection, so the effect of this chemotherapy/radiotherapy approach remains uncertain and thus cannot be recommended for MTT treatment. Moreover, chemo- and radiotherapies were followed by stem cell transplantation, and the contribution of stem cell transplantation to the outcome is questionable. Thus, answer C is incorrect.

Most studies have shown multimodality therapeutic approaches, including surgical resection supported by chemotherapy and radiotherapy, to be the best options for achieving a good prognosis for patients with MTT.4,6-10,12,13 The choice of treatment strategies is diverse and dependent on numerous factors. If complete resection of the tumor is considered feasible, patients with MTT often undergo surgery in combination with adjuvant chemotherapy and/or postoperative radiation therapy.8,10 Postoperative chemotherapy and radiation therapy to the primary site can improve the chances of survival.7,9,10 In 2020, Ailing Zhao, MD, and colleagues compared the survival rates of children treated by different modalities and demonstrated that the rates were significantly improved for children who received postoperative therapies, vs those who had surgery alone.7 However, enlarged tumors and metastatic lesions limit the efficacy of surgery followed by adjuvant therapy. For a subset of patients with high-grade, metastatic, primarily unresectable MTT, neoadjuvant chemotherapy is included in a multimodal treatment approach to reduce the tumor sizes.7,16 As no standardized chemotherapy strategy exists for MTT, the choice of chemotherapy regimens is based on generally accepted protocols and varies from case to case. Neoadjuvant chemotherapy involving anthracycline (doxorubicin) and ifosfamide is often administered to patients with tumors larger than 5 cm, which are considered unresectable. After tumor size has decreased, surgical resection of the primary site and oligometastases must be performed. Subsequent treatment must include adjuvant chemotherapy and/or postoperative radiation to eliminate microscopic, undetectable tumor cells and to reduce the risk of metastases. According to the data available in the literature, for children who received combination treatment of surgery, chemotherapy, and radiation therapy, the overall survival (OS) is 15 months (range, 8-22 months), and the 5-year OS rate is about 30%.7 Analyzing all these data leads us to conclude that the most effective treatment option is likely to be a combination of neoadjuvant chemotherapy, including ifosfamide/doxorubicin, followed by complete resection of the tumor and supported by adjuvant chemotherapy and/or postoperative radiation therapy at a dosage of 40 to 70 Gy. Therefore, answer D is correct.

Although surgical resection continues to be among the most important elements of MTT treatment, improvement of outcome and good prognosis can be achieved only via multimodal treatment approaches that involve radiation and systemic chemotherapy. In our case, the patient received chemotherapy according to the VDC/IE protocol, and he responded well. After 11 cycles of chemotherapy, resection of the primary site and the lung metastases was performed. Upon further histological and IHC examination, good response was observed, defined as 3% viable tumor at resection and surgical margins presenting with healthy tissue, without a tumor bed, R0. The patient continued receiving postoperative chemotherapy with the same regimen for a total of 14 cycles. Currently, he is in remission, awaiting radiotherapy of the primary site with 55.8 Gy.

CONFLICT OF INTEREST STATEMENT: All authors declare that there is no conflict of interest. 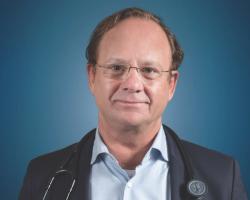