The MSK expert explained that pre- and post-test education on genetic testing also improved family discussions about their risk.

Pre- and post-test education on genetic testing may help spark conversations among those who may be at risk for cancer, according to Kelly Morgan, MS, CGC.

In a recent study, presented at the 2020 ASCO Virtual Scientific Program, the BRCA Founder OutReach (BFOR) offered pre-testing online education with posttest engagement of primary care providers, which appeared to be effective in educating both patients and providers alike.

You know, you could imagine, if you will, that a tool like this where people can access medical information that's very detailed from home is something that could lend itself well to being shared with family.

One of the things along those lines that we learned from this study that's very interesting is, I mentioned that about 3.4% of participants tested positive. When we look at that group, over half, so actually over 60%, had a family mutation. So that would suggest that many individuals are taking advantage of this model to go forward with testing for what was already in their family. So we might imagine that this testing might have been primarily up took by individuals who didn't have any known risks and we're hearing about for the first time, but rather, it seems to be a tool that actually lends itself pretty well to spreading genetic test and genetic information within a family. 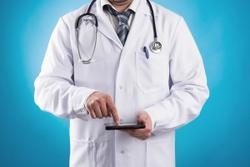