Efficacy of lenalidomide plus rituximab was similar to chemotherapy induction in previously untreated symptomatic FL, with a better safety profile.

Clinicians may have a new first-line treatment option to offer patients with advanced follicular lymphoma (FL). Results of a randomized phase III trial indicate that lenalidomide, an immunomodulatory agent with mechanisms of action complementary to those of rituximab, has efficacy to similar to that of chemotherapy induction when combined with rituximab followed by rituximab maintenance in previously untreated symptomatic FL. French researchers reported at the 23rd Congress of the European Hematology Association (EHA) that lenalidomide may be equally as effective as the current standard of care for patients with advanced FL, but with a different safety profile.

Franck Morschhauser, MD, from Centre Hospitalier Universitaire RÃ©gional de Lille, UnitÃ© GRITA, Lille, France, presented data from the RELEVANCE trial, which compared the efficacy and safety of lenalidomide plus rituximab to rituximab plus chemotherapy followed by rituximab maintenance in previously untreated patients with FL. The two regimens produced similar outcomes, but the adverse events related to the different regimens were markedly different.

Morschhauser, the study’s principal investigator, said data are now available on 1,030 patients who were randomized 1:1 to receive treatment for 120 weeks. There were two co-primary endpoints: complete response at 120 weeks and progression-free survival (PFS). The study was conducted so that both arms had similar baseline characteristics. It failed to show superiority of either regimen for either co-primary endpoint.

At a median follow-up of 37.9 months, complete response rates at 120 weeks were similar between groups (48% for lenalidomide plus rituximab vs 53% for rituximab plus chemotherapy). The 3-year duration of response was 77% for the lenalidomide arm compared with 74% in the chemotherapy arm. The 3-year PFS rates were almost identical (77% vs 78%). The study also demonstrated high 3-year overall survival (OS) rates for both arms (94%).

The significant differences in the safety profiles between the two different regimens in this patient population were notable. Morschhauser and colleagues found higher rates of grade 3/4 neutropenia (34% vs 50%) and febrile neutropenia (2% vs 6%) with rituximab plus chemotherapy.  However, there were higher grade 3/4 cutaneous reactions (7% vs 1%) with lenalidomide plus rituximab. Second primary malignancies were reported in 7% of patients in the lenalidomide arm compared with 9% in the chemotherapy arm. The rate of grade 5 adverse events was 1% in both arms.

This study is the first randomized phase III superiority comparison of this immunomodulatory regimen vs standard rituximab plus chemotherapy followed by rituximab maintenance in previously untreated patients with advanced FL. The investigators concluded that this new novel immunotherapy approach may be a first-line option for FL patients. 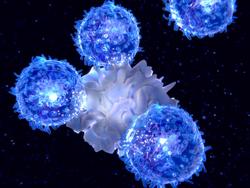