“Pembrolizumab and chemotherapy demonstrated a statistically significant and clinically meaningful improvement in PFS [progression-free survival] versus chemotherapy alone in the first-line treatment of patients with metastatic TNBC with a tumor PD-L1 CPS of 10 or more,” Hope S. Rugo, MD, a professor in the Department of Medicine, Hematology/Oncology, and director of Breast Oncology and Clinical Trials Education at the University of California San Francisco, Helen Diller Family Comprehensive Cancer Center, said in a virtual presentation of the data. “In subgroup analyses, the improvement in PFS with pembrolizumab plus chemotherapy was observed regardless of chemotherapy partner.”

For the double-blind KEYNOTE-355 trial, patients in the locally recurrent, inoperable, or metastatic setting who had not received prior chemotherapy and were at least 6 months out following curative-intent treatment (N = 847) were randomized 2:1 to receive either pembrolizumab plus chemotherapy (n = 566) or chemotherapy alone (n = 281) until disease progression, unacceptable toxicity, withdrawal of consent, or patient decision. Stratification factors included the type of on-study chemotherapy, tumor PD-L1 expression at baseline (CPS ≥1 vs <1), and prior treatment with the same class of chemotherapy in the (neo)adjuvant setting. Patients with active central nervous system metastasis, autoimmune disease, or systemic steroid use were not eligible for participation in the study.

The dual primary end points of the trial were PFS and overall survival (OS) in patients with PD-L1–positive tumors (CPS ≥10 and CPS ≥1) and in the intention-to-treat (ITT) population. Secondary end points included objective response rate (ORR), duration of response (DOR), and disease control rate (DCR). Treatment effect in both the PD-L1–positive and ITT populations according to on-study chemotherapy partner was an exploratory end point.

At the American Society of Clinical Oncology 2020 Virtual Scientific Program, PFS results were presented and showed a statistically significant improvement with the addition of pembrolizumab in patients with PD-L1 expression by CPS of 10 or more (HR, 0.65; 95% CI, 0.49-0.86; P = .0012).2

In the current analysis of PFS results, outcomes were presented for each chemotherapy partner as well as key secondary efficacy measures with results consistently favoring pembrolizumab.

The hazard ratios for PFS favored pembrolizumab plus chemotherapy regardless of the choice of chemotherapy partner or patient population by PD-L1 CPS. Anecdotally, the analysis of pembrolizumab plus paclitaxel versus paclitaxel alone resulted in the greatest PFS benefit in the CPS 10 or greater group (HR, 0.33; 95% CI, 0.14-0.76), the CPS 1 or greater group (HR, 0.46; 95% CI, 0.26-0.82), and the ITT population (HR, 0.57; 95% CI, 0.35-0.93) when compared with the hazard ratios of the same comparisons with other chemotherapy partners. However, Rugo said no conclusions could be drawn that indicate which chemotherapy regimen was favored in combination with pembrolizumab administration.

“Although subgroup analyses by on-study chemotherapy were prespecified, the trial was not powered to compare efficacy across treatment groups by different chemotherapy regimens,” said Rugo, who is a professor of medicine and director of Breast Oncology and Clinical Trials Education at the University of California San Francisco Helen Diller Family Comprehensive Cancer Center.

PD-L1 enrichment was also correlated with greater differences in median DOR between the experimental and control arms. The median DOR was 19.3 months with pembrolizumab versus 7.3 months with chemotherapy in the population with a CPS of 10 or more, was 10.1 months versus 6.5 months in those with a CPS of 1 or more, and was 10.1 months versus 6.4 months, respectively, in the ITT population.

Patient baseline characteristics were well balanced between the 2 trial arms. The median age for both groups was 53 years and about 40% of patients had an ECOG performance status of 1. PD-L1 expression by CPS was greater than 1 in roughly three-quarters of patients and greater than 10 in close to 40%. Gemcitabine/carboplatin was the most frequently used chemotherapy use in close to 55% of patients followed by nab-paclitaxel in roughly a third; the rest received paclitaxel. Most patients had no prior experience with the same class of chemotherapy agent chosen for therapy.

Prior data regarding pembrolizumab as monotherapy and in combination with chemotherapy have established the agent’s effect on tumor response in patients with TNBC across various clinical settings, with improved clinical efficacy presenting in patients with higher PD-L1 expression. In the phase 3 KEYNOTE-119 trial (NCT02555657), pembrolizumab as monotherapy induced deeper and more durable responses versus chemotherapy—especially in the PD-L1–enriched population—yet this failed to translate into a survival benefit.3 Data in the early-stage TNBC setting offer rationale for the use of pembrolizumab plus chemotherapy, evidenced first by the phase 1b KEYNOTE-173 trial (NCT02622074), in which the combination showed promise in patients with high-risk disease with a pathologic complete response (pCR) rate of 60%.4 Randomized data from the phase 3 KEYNOTE-522 trial (NCT03036488) further supported its use in the early-stage setting with a statistically significant pCR improvement seen with the use of pembrolizumab plus chemotherapy versus chemotherapy alone.5

In November, pembrolizumab in combination with chemotherapy was granted accelerated approval by the FDA for use in patients with locally recurrent, unresectable, or metastatic TNBC whose tumors express PD-L1 (CPS ≥10) as determined by an approved test, based on findings from KEYNOTE-355.6

Regarding the availability of OS data, Rugo said these results would likely be ready for presentation next year. 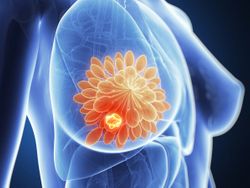