Excluding unassisted attempts to quit smoking, approved medications were more likely to be utilized than other cessation methods in this study, demonstrating a strong correlation with successful quit attempts.

A study published in the American Journal of Preventive Medicine suggested that pharmacotherapy is an important element of successful smoking cessation in patients with cancer.1

“This is important because the step of offering smoking cessation medication may be overlooked during the course of a patient’s overall cancer treatment,” lead author Ramzi Salloum, PhD, assistant professor in the University of Florida College of Medicine’s department of health outcomes and biomedical informatics, as well as a UF Health Cancer Center member, said in a press release.2 “This study highlights the importance of including smoking cessation medication as a part of the treatment for cancer patients who smoke.”

Using Wave 1 (2013-2014) of the household-based, nationally representative Population Assessment of Tobacco and Health Study, researchers assessed the self-reported smoking status, quit attempts, and cancer diagnosis by participants. More specifically, researchers evaluated cessation methods used among those who had attempted to quit within the past year, including behavioral counseling, approved cessation medications, e-cigarettes, and unassisted attempts.

“To our knowledge, this is the first population-based study that's looking at a sample that represents the entire U.S. population instead of a single location and is outside of controlled environments, like a clinical trial,” Salloum said. “This is real-world information about cancer survivors who smoke and their attempts to quit smoking.”

Importantly, excluding unassisted attempts, approved medications were more likely to be utilized than other cessation methods and demonstrated a strong correlation with successful quit attempts. The reported prevalence rates of smoking-cessation medication and counseling use among cancer survivors were comparable to those previously reported among the general population.

Notably, the National Cancer Institute is currently leading an initiative which aids in the implementation of smoking cessation programs at 42 designated cancer centers across the country, supporting individualized approaches to behavioral counseling and pharmacotherapy. Researchers from the current study suggested that their findings could further promote this initiative.

“This study could inform that initiative in terms of highlighting the importance of medication use,” said Salloum. “Cessation medications are potentially lower cost and may be easier to implement compared with other cessation methods.”

The study investigators also highlighted the importance in insurers and health systems facilitating an increase in access to cessation support, along with clinicians.

“Although clinicians have a role to help provide cessation assistance, insurers and health systems also have a critical role to increase access to cessation support,” the authors wrote. “Clinicians and insurers should consider mechanisms that facilitate affordable access to pharmacotherapy in parallel with medications for cancer care.” 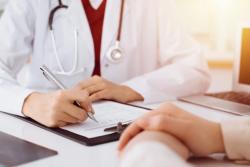