Rituximab in the Treatment of Gastrointestinal Mucosa-Associated Lymphoid Tissue Lymphoma

Originally described in the 1980s, mucosa-associated lymphoid tissue (MALT) lymphoma is an indolent, B-cell lymphoma that has been reclassified by the revised European-American Lymphoma (REAL) classification system as extranodal, marginal

Originally described in the 1980s, mucosa-associated lymphoid tissue (MALT) lymphoma is an indolent, B-cell lymphoma that has been reclassified by the revised European-American Lymphoma (REAL) classification system as extranodal, marginal zone B-cell lymphoma. In the majority of stage IE patients, the causative agent is Helicobacter pylori, and treatment with antibiotics often resolves the lymphoma (Roggero E et al: Ann Intern Med 122:767-769, 1995). If antibiotic therapy fails, the next step would be chemotherapy, radiation, or surgery. However, certain patients are not candidates for these modalities.

We retrospectively reviewed five cases of gastrointestinal (GI) MALT lymphomas from 1996 to 1999. The five patients had all been treated with the anti-CD20 monoclonal antibody, rituximab (Rituxan), after not responding to antibiotics directed against H pylori; none of the patients was a surgical candidate. Rituximab is approved for CD20-positive follicular lymphomas. MALT lymphomas are B-cell and CD20-positive or L-26positive; immunohistochemical stain for CD 0).

Rituximab was administered at 375 mg/m² weekly for 4 weeks. Median age of the patients was 59 years (range, 24 to 81 years), with three males and two females. Four patients had stage IE disease and one, stage IIE. All patients were diagnosed by endoscopy, with pathology showing positivity of L-26 stain on the lymphoepithelial lesions of the biopsy specimens.

Primary sites of disease were the rectum (N = 1), stomach (N = 3), and cecum (N = 1). The patient with stage IIE MALT had disease in the stomach and jejunum.

Only one patient was positive for H pylori, seen morphologically on the biopsy and by the urease test on the specimens. Three patients had associated inflammatory disorders: chronic gastritis (N = 2) and primary sclerosing cholangitis (N = 1).

Initial post-rituximab endoscopy was performed at 3 months and then every 6 months thereafter. All patients underwent pretreatment CT of the chest, abdomen, and pelvis, as well as bone marrow biopsy, and two patients had gallium scans.

The response rate was 100% (four complete responses [CRs] and one partial response [PR] > 50%). All patients are alive with a median follow-up of +19 months (range, 12 to 38 months). At present, three patients are still in CR, with a median response duration of 13 months, one patient has residual disease, and one patient relapsed 11 months after treatment. Toxicity was minimal, consisting mainly of infusion-related effects (fever, chills, and myalgia).

CONCLUSION: Patients with MALT lymphomas of the GI tract respond very well to rituximab with minimal toxicity. Longer follow-up is needed to assess the long-term disease-free survival in this group of patients with an indolent lymphoma. A larger cohort of patients should be studied utilizing a combined-modality approach. Rituximab is another therapeutic approach to MALT lymphomas that can be used in patients who do not respond to H pylori antibiotics and are not surgical candidate

Click here for Dr. Bruce Chesons commentary on this abstract. 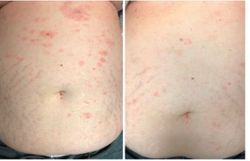 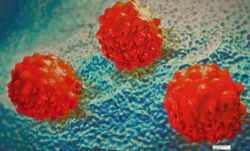