Kristie Kahl: What are the risk factors for small cell lung cancer?

Kristie Kahl: What are the stages of small cell lung cancer, and what is the typical course of progression?

Kristie Kahl: What’s the prognosis for patients with small cell lung cancer, and what are the known prognostic factors?

Benjamin Levy, MD: Unfortunately, the prognosis for small cell lung cancer is certainly not as good as non–small cell lung cancer. In terms of some of the prognostic indicators that we know about, poor performance status is 1. Patients who have a poor performance status generally don’t do as well. Weight loss is certainly considered to be a poor prognostic indicator. The continuation of smoking may contribute to chemotherapy resistance, and also the extent of the disease is certainly going to correlate with outcomes. Also, the paraneoplastic syndromes that occur with small cell are a little less understood, and they also can certainly cause issues in terms of worsening outcome.

When we look at the overall prognosis of small cell, unfortunately, this is a historically progressive disease. It is difficult to treat. Responses happen with chemotherapy, but progression is generally universal. For limited-stage small cell lung cancer, where you’re going for cure, you can cure a percentage of patients. Routinely 10% to 15% of patients can be cured with limited-stage disease. Unfortunately, a lot of those patients will relapse, and the median survival time for these patients is generally around a 1½ to 2 years. For extensive-stage small cell, where the treatment is palliation and extension of life, we are looking at median survival times that range anywhere from 10 to 12 months, maybe a little longer. Of course, the advent of immunotherapy with chemotherapy, which we’ll talk about, has improved outcomes, but we’re still really wrestling with how to best treat these patients.

Benjamin Levy, MD: That’s a relevant and a good question. Why is it that small cell lung cancer is so difficult to treat? We’re still trying to understand this. Some of the data originally put out with immunotherapy showed that immunotherapy worked best for patients who smoked the most. This is a smoking-related cancer, so you would think that immunotherapy would really work well for small cell. The gains we’ve witnessed with immunotherapy have been modest. This is a complex tumor biology. We’re still trying to understand the underlying genomic features that make this so hard. These tumors are rapidly dividing and have a proclivity to metastasize early. Unfortunately, they develop resistance in a fairly short amount of time. While chemotherapy can kill these cells, they are prone to resistance and grow aggressively. I hope I have better answers if you ask this question in the next 5 to 10 years: why this tumor biology is so complex. It’s fraught with genetic mutations that have a high tumor mutational burden, and this translates into being a historically aggressive disease. 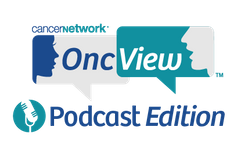