Despite therapy with cyclosporine (Neoral, Sandimmune) and prednisone, thepatient had no response and remained transfusion dependent for 6 months.Intravenous immunoglobulin was also tried at 1 g/kg for 2 days, to no avail.Rituximab was then started at 375 mg/m²/wk for 8 weeks, beginning October 2000.He became transfusion independent after the fourth treatment and hisreticulocyte count rose to 4% with normalization of hemoglobin (13 g/dL) and WBCcount (4,900/µL). Repeat bone marrow biopsy confirmed resolution of his pure redcell aplasia. As of January 2002, the patient remains in complete remission ofhis CLL and pure red cell aplasia.

Case 2 is a 47-year-old woman who had had B-cell CLL for the last 7 years.She was started on therapy with fludarabine (Fludara) in February 2000, based onrapid rise of her WBC count (160,000/µL) with normal hemoglobin at the time.After five cycles of therapy, her hemoglobin dropped to less than 8 g/dL and shebecame transfusion dependent. Her reticulocyte count was near 0%, with normalLDH and negative Coombs.

The patient was started on erythropoietin injections with still no response.After six cycles of fludarabine therapy, her WBC count was 12,000/µL with 10,000lymphocytes, and she was still blood transfusion dependent. Rituximab wasstarted in August 2000 at the same dose as the patient in case 1 above.Gradually, her hemoglobin normalized over 4 to 6 weeks, and she becametransfusion independent. Her reticulocyte count rose to 10%, WBC count was4,300/µL (40% lymphocytes), and hemoglobin was 13.5 g/dL. As of February 2002,she is still in remission.

CONCLUSION: To our knowledge, this is the first report of pure red cellaplasia in patients with CLL responding to rituximab therapy. We believe itdeserves further investigation. 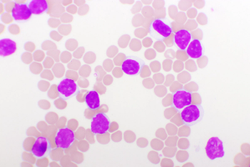 Acalabrutinib Plus Venetoclax To Be Evaluated in Treatment-Naive CLL/SLL

Lindsey Roeker, MD, Discusses Which Data From ASH 2021 Have the Biggest Potential to Impact Care