Researchers tested the addition of the T cell–boosting decitabine to anti–PD-1 therapy with camrelizumab among patients with relapsed or refractory classic Hodgkin lymphoma.

The addition of the T cell–boosting decitabine to anti–programmed death 1 (PD-1) therapy with camrelizumab resulted in a significantly increased rate of complete remission (CR) compared with camrelizumab alone among patients with relapsed or refractory classic Hodgkin lymphoma, according to the results of a phase II study.

“At present, the CR rate with anti–PD-1 monotherapy in patients with heavily pretreated relapsed/refractory classic Hodgkin lymphoma is generally 20% to 30%,” wrote researcher Jing Nie, PhD, of Chinese People’s Liberation Army General Hospital, and colleagues, in the Journal of Clinical Oncology. “To our knowledge, we now report the largest cohort of patients with relapsed/refractory classic Hodgkin lymphoma who were treated with combination anti–PD-1 and DNA demethylating agent with an extremely high CR rate of 71%.”

According to the study, prior research had shown that DNA methylation inhibition enhanced PD-1 blockade-mediate T-cell rejuvenation.

“PD-1 blockade can reinvigorate exhausted T cells by disrupting the binding of PD-1 with PD-L1 on tumors or other immune-suppressive cells,” the researchers wrote. “However, exhausted T cells possess a distinct epigenetic profile compared with effector and memory T cells and are not remodeled by PD-1 blockade. This could limit the long-lasting antitumor ability of anti–PD-1 antibodies. Low-dose decitabine could alter the epigenetic status of both tumors and immunocytes.”

Therefore, in this study, Nie and colleagues tested whether the addition of DNA demethylating decitabine could boost the activity of the anti–PD-1 camrelizumab.

The study included 86 patients with relapsed or refractory chronic Hodgkin lymphoma who had received at least 2 lines of prior therapy. Patients were assigned 1:2 to camrelizumab monotherapy or decitabine plus camrelizumab. Any patient with prior anti–PD-1 therapy was assigned to the combination arm.

“As appropriate immune activation is required for immune-based therapies, the epigenetic modifying agent decitabine could promote T-cell activation and may strengthen the effectiveness and duration of clinical responses with anti–PD-1 antibodies,” the researchers concluded. 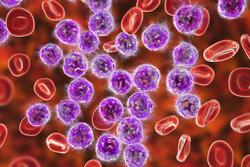