“In this study, we developed and implemented a high-touch, low-cost, technology-independent intervention that integrates CHWs into cancer care soon after an initial or recurrent cancer diagnosis. The intervention was informed by patient, clinician, and payer stakeholders as a potentially more acceptable and effective approach to overcome our previously identified structural barriers in the delivery of these important services,” the investigators wrote.

The randomized trial was conducted at the Virginia K. Crosson Cancer Center in Fullerton, California, and examined the activity of 2 part-time (20 hours/week) CHWs for the intervention group. Of the 128 patients included in the analysis, randomization occurred in a 1:1 fashion to either the intervention or usual care groups (n = 64 each). The median patient age was 67 years (range, 19-89), with most patients being White (67.2%) and privately insured (60.9%). Most patients had at least some college education or a 2-year degree (32.8%), a 4-year college degree (14.8%), or more than 4 years of college (15.6%). Cancer upon presentation was most frequently at stage IV (75.8%) and many (40.6%) had recurrent disease. The most common sites of malignancy were the gastrointestinal tract (38.2%), thoracic structures (18.8%), or gynecologic organs (8.6%).

The 2 CHWs, a White retired nurse and a bilingual Latinx woman, were hired based on their interpersonal skills and were trained for their roles using curricula developed by the lead investigator. Each delivered structured programs to their assigned participants twice monthly over 6 months. Open-ended discussions also occurred 1:1 between CHWs and participants.

According to investigators, future research may include examinations of larger and more diverse participant groups with longer follow-up periods. This trial was conducted in only 1 community clinic and had a low number of Black participants, thereby limiting generalizability. Nonetheless, the results indicated the potentially robust benefits of CHW-led interventions for adults with advanced stages of cancer. 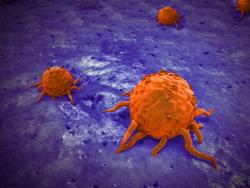