FoundationOne CDx has been approved by the FDA as a companion diagnostic for entrecitinib for the treatment of ROS1 fusion–positive non–small cell cancer or NTRK fusion–positive solid cancers.

The FDA has approved FoundationOne CDx as a companion diagnostic for entrectinib (Rozlytrek), for patients with ROS1 fusion–positive non–small cell lung cancer (NSCLC) or NTRK fusion–positive solid malignancies, according to a press release from Roche.1

The approval is based on findings from several studies, including the phase 1 ALKA-372-001, phase 1 STARTRK-1 (NCT02097810), and phase 2 STARKTRK-2 (NCT02568267) trials. As part of the approval, the FDA has added a condition where a post-approval study must be conducted by the Flatiron Health-Foundation Medicine’s Clinico-Genomic Database to continue to identify patients with ROS1 fusion-positive NSCLC who would benefit from entrectinib.

A total of 54 patients with advanced or metastatic solid tumors enrolled on the ALKA-372-001 trial, with a median age of 53 years. The majority were male, and 56% had an ECOG performance status of 0.2 In 94% of patients received 4 or more prior systemic therapies, and 19% had prior ROS1/ALK inhibitors. The most common tumor type was NSCLC.

The median age of patients (n = 65) was 57, a majority were male, and 63% had an ECOG performance status of 1. Prior systemic therapies were used in 39% of patients and ranged between 3 to 4 lines. Additionally, 34% of prior treatments were ROS1/ALK inhibitors. The most common tumor type was NSCLC.

All patients received continuous daily dosing of study treatment for 28 days. Two dose-limiting toxicities occurred in the trial at a daily dose of 800 mg.

The STARTRK-2 trial was a basket study that included with patients with solid tumors harboring NTRK 1/2/3, ROS1, or ALK gene fusions. Patients were assigned to specific baskets based on tumor type and gene fusion. The primary end point was objective response rate, and the secondary end points were DOR, time to response, and clinical benefit rate.

Patients were included in the trial if they had histologically or cytologically confirmed diagnosis of metastatic solid tumors, archival of fresh tumor tissue for those with molecular testing, and measurable or evaluable disease. Exclusion criteria included current participation in another trial, prior treatment with approved TRk, ROS1, or ALK inhibitors, and a history of other previous cancer that would interfere with safety or efficacy. 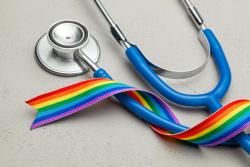