Regular approval has been granted to capmatinib for the treatment of patients with metastatic non–small cell lung cancer whose tumors harbor a MET exon 14 skipping mutation.

The FDA has granted regular approval to capmatinib (Tabrecta) for the use in MET exon 14 skipping mutation–positive metastatic non–small cell lung cancer as detected by and FDA approved test.1

In May 2020, capmatinib was granted accelerated approval for the same indication and was supported by results from the phase 2 GEOMETRY mono-1 trial (NCT02414139).2 Data from an additional 63 patients with 22 months longer follow-up led to the conversion from accelerated to regular approval and allowed the FDA time to assess the durability of response and clinical benefit.

In the efficacy analysis, 160 patients who received 400 mg of capmatinib orally twice a day with food until disease progression or unacceptable toxicity were examined. The primary end point was overall response rate (ORR) with secondary end points of duration of response (DOR), disease control rate, and progression-free survival.

Patients had a median age of 71 years, 61% of whom were female, 77% who were White, 61% had never smoked, 83% had adenocarcinoma, and 16% had central nervous system metastases. In patients who were previously treated, 81% received 1 prior line of therapy, 16% received 2, and 3% received 3. Most previously treated patients (86%) received prior platinum-based chemotherapy.

Patients were enrolled on the trial if they had stage IIIB or IV NSCLC, histologically or cytologically confirmed disease, and at least 1 measurable lesion. Additionally, patients had to be recovered from all toxicities from prior therapies, have adequate organ function, and an ECOG performance score of 0 or 1.

Exclusion criteria included having prior treatment with crizotinib (Xalkori) or any other cMET or human growth factor inhibiting agents, an EGFR mutation with sensitivity to targeted therapy, or an ALK-positive rearrangement. Patients could not have clinically significant or uncontrolled heart disease, received strong inducers of CYP3A4, or impairment of gastrointestinal function or disease that may alter the absorption of the treatment. 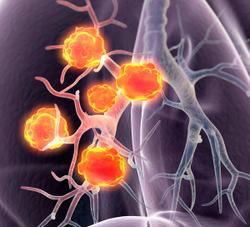