Results from the phase 3 FRUTIGA study indicate that fruquintinib plus paclitaxel produced promising progression-free survival outcomes among patients with second-line gastric cancer, although no significant improvement in overall survival was reported.

Fruquintinib (Elunate) and paclitaxel (Abraxane) combination therapy produced a statistically significant and clinically meaningful improvement in the primary end point of progression-free survival (PFS) in patients with advanced gastric or gastroesophageal junction (GEJ) adenocarcinoma, according to a press release on initial results from the phase 3 FRUTIGA study (NCT03223376); however, the overall survival (OS) benefit, the trial’s co-primary end point, was not statistically significant based on the study’s pre-specified statistical plan.

Full detailed results of the FRUTIGA study are expected to be shared at an upcoming scientific meeting. Additionally, these results and further analyses will be shared with the China National Medical Products Administration.

“By meeting the primary endpoint of PFS, fruquintinib demonstrated consistent efficacy and safety in gastric cancer indication in addition to its approved colorectal cancer indication,” lead principal investigator Rui-Hua Xu, MD, professor in the Department of Medical Oncology and president of the Sun Yat-Sen University of Cancer Center, said in the press release. “I am extremely excited that fruquintinib may provide a potential new oral treatment option for [patients with] second-line gastric cancer based on the FRUTIGA trial.”

The randomized, double-blind, phase 3 FRUTIGA study was designed to compare fruquintinib and paclitaxel combination therapy with paclitaxel monotherapy in the second-line treatment of patients with advanced gastric cancer or GEJ adenocarcinoma. Patients were randomly assigned 1:1 to receive either 80 mg/m2 of paclitaxel on days 1, 8, and 15 of a 4-week cycle with fruquintinib or placebo taken orally once a day for 3 weeks on and 1 week off. Patients received study treatment until the occurrence of progressive disease, death, unacceptable toxicity, withdrawal of consent, or other conditions that met the end of treatment criteria.

Other secondary end points included the safety and tolerability of the study regimen by incidence, severity, and outcomes of adverse effects and patient results from the European Organization for Research and Treatment of Cancer Quality of Life Questionnaire.

Patients who were 18 to 75 years in age with histologically or cytologically confirmed gastric or GEJ adenocarcinoma were eligible to enroll on the study. Additional inclusion criteria included having metastatic disease or locally advanced, unresectable disease; disease progression during or within 4 months after the last dose of first-line therapy; adequate hepatic, renal, heart, and hematologic functions; at least 1 measurable lesion larger than 10 mm in diameter; and an ECOG performance status of 0 or 1.

Patients were unsuitable for enrollment if they were pregnant or had any factors that influenced the usage of oral administration. Patients were also unsuitable for enrollment if they had any evidence of central nervous system metastases, previous treatment with vascular endothelial growth factor inhibition, evidence or history of bleeding tendency within 2 months of enrollment randomization, bone fracture or wounds that were not cured for a long time, or coagulation dysfunction. 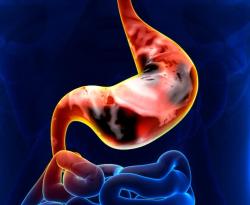