The Prognostic Importance of EVI1 Expression

In AML, the role of ecotropic virus integration site-1 (EVI1) expression is debated. To date, results of studies have been mixed with only some studies demonstrating EVI1 expression related to poorer survival. In a meta-analysis published in the Annals of Hematology, researchers set out to uncover the predictive capability of this marker.

Importantly, the investigators noted that due to location, altered EVI1 most often accompanies 3q26 rearrangements. However, it remains to be elucidated whether increased EVI1 expression is related to AML outcomes in those without 3q mutations. On a related note, higher levels of EVI1 may affect AML subgroups differently, which, according to the authors, is “of utmost significance for clinical physicians.”

In other findings, EVI1H expression was rarely found with NPM1, FLT3-ITD and DNMT3A mutations. Wu et al point to these mutations and mutations as avenues of further research.
EVI1 is a transcription factor on chromosome 3. It was first discovered two decades ago in murine models. It has stem cell specific expression patterns and mediates growth of hematopoietic stem cells, and plays a role in AML, myelodysplastic syndrome (MDS), and CML.

The investigators suggested that the findings of the current study could assist clinicians with risk stratification and treatment decisions-especially because most patients are NC.

EVI1, which also goes by MECOM, encodes a 145 kDa-unique zinc finger that attaches with DNA. This transcription factor is hypothesized to interfere with granulocyte and erythroid cell differentiation, as well as promotion of megakaryocyte breakdown, to aid with the differentiation and proliferation of hematopoetic stem cells.
Several drug targets for EVI1 have been suggested such those involved in leukemogenesis and stem cell maintenance. Examples include the transcription factor Pre-B Cell leukemia Homeobox 1 (PBX1) and Phosphatase and Tensin Homolog (PTEN), which is a tumor suppressor gene. However, none of these targets have proven related to EVI1-deregulated AML.

Per the authors the current study had several limitations. First, most studies in the meta-analysis were observational and not randomized-controlled trials. Second, the sample contained cases of therapy-related AML and secondary AML, which have a worse prognosis and could thus confound results. Third, limited OS data precluded the ability to study AML patients without 3q alterations. Fourth, the studies were highly heterogeneous in a clinical sense. 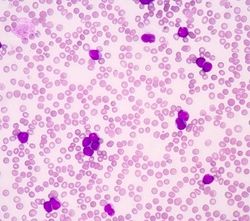