A recent study posted on medRxiv has revealed that close to 1 out of every 5 individuals with comorbid conditions surveyed show hesitancy toward receiving the COVID-19 vaccine.

The patients who were questioned (n = 21,943) represent a population that is disproportionately affected by COVID-19 and included patients with cancer (27%) as well as those with autoimmune disease (23%) and chronic lung disease (38%).

In total, 10% said they would not receive the vaccine whereas 4% said they would likely refuse it and 5% were unsure (hesitancy rate, 19%). Factors that were associated with hesitancy were younger age, female gender, black-Pacific-Island-Native American heritage, had less formal education, conservative political tendencies, opposition to masks or routine influenza vaccinations, and skepticism of media coverage.

In the 3960 patients who indicated hesitancy, the most common reasons given were that the vaccine was “too new” (53%), concerns regarding adverse effects (44%), and worries about getting the virus from the vaccine (8%). Other reasons centered around the process of developing the vaccine, such as a distaste for the role of politics in its development (39%), distrust of regulatory processes ensuring its safety and efficacy (9%), and the belief that it was not developed responsibly (5%).

Investigators also credit a lack of information from vaccine clinical trials regarding these patient populations as another reason for the apparent hesitancy. “Cancer patients and individuals with immunodeficiencies were largely excluded from vaccine development, yet our study demonstrates safety in these high-risk populations,” said Stuart Goldberg, MD, who is a medical advisory board member at Inspire, the company responsible for conducting the survey.

In 5459 patients with cancer, 30% had received at least 1 injection and 6% had complete both. Rates of local and systemic effects were similar in this population, at 65% and 34% after the first injection, respectively, and 72% and 34% after the second.

“It’s incredible to see so much enthusiasm from our community to share their experiences about COVID-19,” lead study author Richard Tsai, who is senior vice president of Marketing at Inspire, said about the responses to the survey. “This information can be extremely valuable to many with comorbid conditions and medical researchers.”

Respondents completed a questionnaire online that took, on average, 17 minutes to complete. The average age bracket of patients was between 56 and 65 years of age, with 76% of respondents being female. On average, the group included those who were highly educated, with 60% having a college or post-graduate degree. Reporting on political tendencies showed diversity in the set, with 32% tending toward liberal policies, 21% conservative, 24% independent, and 23% preferring not to declare. 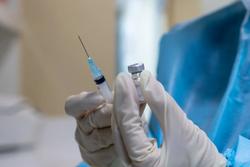 Medical World News® Behind the Science: An Inside Look the WesternU Health COVID-19 Vaccine Clinic