Takayuki Yoshino, MD, PhD, spoke about the benefit of panitumumab vs bevacizumab in combination with mFOLFOX6 in the frontline treatment of patients with RAS wild-type metastatic colorectal cancer.

Lead investigator Takayuki Yoshino, MD, PhD, director for the Department of Gastroenterology and Gastrointestinal Oncology and deputy director of the National Cancer Center Hospital East in Kashiwa, Japan, spoke with CancerNetwork® about how these findings reflect a need for a paradigm shift in the United States in the frontline setting for this patient population.

CancerNetwork®: What was the rationale for combining panitumumab with mFOLFOX6 for the treatment of RAS wild-type mCRC?

Yoshino: In the first-line setting [for mCRC], there are a lot of global trials. The [current] standard of care [involves] a choice between [a few] biologics—either anti-EGFR monoclonal antibodies, such as cetuximab or panitumumab, or the anti-VEGFR monoclonal antibody bevacizumab. However, the optimal treatment has not yet been determined in terms of the molecular biologics. The cytotoxic chemotherapy regimen mFOLFOX6 is the current standard of care.

What were the key findings of this trial?

The first key finding was that OS in the left-sided population—defined as those patients whose primary tumors are located in the descending colon, sigmoid colon, rectosigmoid, and/or rectum—was superior in those treated with panitumumab over bevacizumab in combination with mFOLFOX6. The median OS difference was 3.6 months, which is clinically meaningful.

Did anything stand out regarding the safety profile of these regimens?

There were no new or unexpected safety signals observed in this study. The most common toxicities were higher in the panitumumab group compared with the bevacizumab group and included acne-like dermatitis, stomatitis, paronychia, dry skin, and hypomagnesemia. Those toxicities were a little higher in the panitumumab group vs the bevacizumab group. However, keep in mind, when balancing efficacy against toxicity, it’s important to consider that the OS benefit with panitumumab was bigger. This combination of panitumumab plus mFOLFOX6 should be established as the new standard of care.

Are there any plans for future analyses based on this research?

Yes, in this trial we are also conducting translational research. We collected pre-treatment tissue and plasma from [roughly] 92% of patients. Additionally, at the time of progressive disease, plasma was collected from 75% of patients. In addition to that, some patients received curative intent surgery after randomization based on treatment effect. Of the 161 patients who underwent surgical resection, 100% contributed surgical specimens. An analysis of these samples is still ongoing but nearing completion. Our translational research data on clinical outcomes will be presented at a future international conference.

What do you hope your colleagues took away from this research?

In the clinical practice setting—especially in the United States—bevacizumab in combination with chemotherapy is still the mainstay treatment in the frontline setting. However, our data show a [clear] OS benefit with the panitumumab/mFOLFOX6 regimen. Our American colleagues and physicians should consider a first-line therapy paradigm shift from bevacizumab to panitumumab.

A Patient’s Diagnosis with HER2+ Metastatic Colorectal Cancer 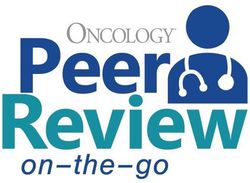