Looking toward the future management of metastatic HSPC, experts consider the results of triplet combination trials like ARASENS and PEACE-1.

Robert Dreicer, MD, MS, MACP, FASCO: Let’s go back to this patient. We’ve talked about the fact that there’s no disagreement, everybody’s going to intensify. Both of my colleagues feel that they might be concerned about even thinking about applying data from the ARASENS and PEACE-1 trials. Let’s spend a minute or two talking about ARASENS. I’ll preface it by saying PEACE-1, which has not yet been published but it’s been presented both at ESMO [European Society for Medical Oncology] and ASCO [American Society of Clinical Oncology annual meetings], in terms of now having data of overall survival in patients who receive ADT [androgen deprivation therapy] with docetaxel intensification, with the addition of abiraterone, at least a year of improvement in overall survival. The ARASENS data, which were presented at ASCO GU [Genitourinary Cancers Symposium] and are now published in the New England Journal of Medicine, also suggest a very significant impact on overall survival. Dr Scholz, your initial impression of the ARASENS data? We talked a bit about how it’s going to impact your practice, although you may be able to prescribe darolutamide off label at this point. We all believe that the label will be expanded and we will be able to use this. What do those data mean to you in terms of how you think about patient management?

Mark Scholz, MD: It makes it easier for me to advocate for something I’ve been doing for over 10 years, with data behind the recommendation now. The whole concept for medical oncologists that there’s a value to effective early treatment in lower volume disease has almost always been borne out. There’s maybe a couple of exceptions. In a situation where you have a life-threatening disease, I’ve been attracted to treatment intensification in patients who can manage the potential toxicity. To me, it streamlines the whole educational process with patients. Whereas in the past, I had to explain the breast cancer data, and they had to do randomized trials, up to 40 or 50 randomized trials in women with breast cancer, before they figured out that maybe early chemotherapy does work. It was an outside-the-box thought back then. It becomes more mainstream with lung, head, and neck cancers. What we’re seeing now with the power of PSA [prostate-specific antigen] and the power of the PSMA [prostate-specific membrane antigen] PET [positron emission tomography] scans, is that what in the past would’ve been nonmetastatic, we’re going to starting to detect early metastasis. It’s the same disease, low volume disease, that in theory is what benefits from adjuvant therapy. The whole field of medical oncology was built on that concept.

Robert Dreicer, MD, MS, MACP, FASCO: Dr George, I’m going to let you have the last word briefly. With PEACE-1 and ARASENS, I get the sense that the data are compelling enough for you to begin to think about this in a broader way than just in the de novo population. So let me ask you a specific question. For patients who are fit to receive triplet therapy, in your judgment, irrespective of age, physiologically fit, is this becoming your standard of care in terms of management?

Saby George, MD, FACP: Yes. I do think that way, and I want to be aggressive when I can. We know that ADT alone prolonged survival. Adding docetaxel prolongs survival further, and we’ve seen that PEACE-1 and ARASENS are demonstrating that adding abiraterone and darolutamide to an ADT and docetaxel backbone prolongs survival significantly beyond the previously established standard. When I have the opportunity to apply a triplet, I would do that, but I would carefully select patients. As you mentioned, if somebody is 60 years old, but physiologically they are 75 or 80 years old, then I’d be cautious. But if it’s an 80-year-old who plays tennis 4 times a week and acts like a 55- or 60-year-old, and presenting with advanced prostate cancer, I would be aggressive in the second patient opposed to the first one.

Robert Dreicer, MD, MS, MACP, FASCO: I want to thank my colleagues, Drs George and Scholz, for joining me in this lively review of the integration of androgen receptor antagonists into our clinical practice, brought to you by the CancerNetwork®. I want to thank our viewing audience for spending a bit of time with us, and I hope that some of these may have some clinical resonance for you. Thank you very much. 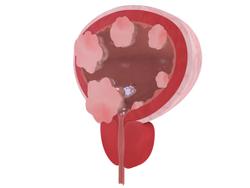