Patients treated with combined therapy had either stage IIIa orIIIb or medically inoperable stage II non-small-cell lung cancer.They were given 50 mg/m² of cisplatin on days one and eightof treatment. They also were given oral etoposide (50 mg bid)on days 1 through 14. The chemotherapy regimen was repeated onday 29. Radiation treatments were started within 96 hours of chemotherapy,to a total dose of 69.6 Gy in 58 fractions over 29 days, 2 fractionsper day, at least 6 hours apart. Patients treated with radiationtherapy alone had similar nodal stage distribution, but somewhatsmaller tumors. The radiation treatments were the same as forpatients treated with combined therapy.

Three patients in the combined group had treatment- related deaths(two pulmonary and one renal). One patient treated with radiationtherapy alone had fatal esophageal toxicity. Toxicity is a majorchallenge, said Dr. Komaki. "We are trying to reduce it byslightly reducing the drug dosage and, in the future, by 3-D conformalradiation therapy," she said. 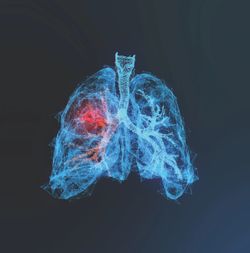