As part of OncoTherapy Network’s coverage of the 58th Annual Meeting & Exposition of the American Society of Hematology (ASH), held December 3–6 in San Diego, California, we spoke with oncologist Nicholas J. Short, MD, of the Division of Cancer Medicine at University of Texas MD Anderson Cancer Center, in Houston.

As part of OncoTherapy Network’s coverage of the 58th Annual Meeting & Exposition of the American Society of Hematology (ASH), held December 3–6 in San Diego, California, we spoke with oncologist Nicholas J. Short, MD, of the Division of Cancer Medicine at University of Texas MD Anderson Cancer Center, in Houston.

Dr. Short: In our cohort of 164 patients with Ph+ ALL, 98 patients (60%) achieved CMR after approximately 3 months of treatment with hyper-CVAD [hyperfractionated cyclophosphamide, vincristine, doxorubicin, and dexamethasone] chemotherapy plus a TKI. Three months was used as the time point for minimal residual disease (MRD) assessment as this time was previously found by our group to be most prognostic for survival.1

OncoTherapy Network:What did your team discover about relapse patterns among patients who had achieved CMR?

Dr. Short: Overall 21 patients (21%) experienced clinical relapse (i.e., hematological or CNS [central nervous system] relapse). Notably, no cases of hematologic relapse were seen after 30 months; although three patients experienced CNS relapse after this time, with the latest relapse being approximately 5 years after first remission. Thus, the risk for CNS relapse appears to remain long after the risk for hematologic relapse.

Dr. Short: CMR rates were higher with each successive generation of TKI. The CMR rates for patients who received hyper-CVAD plus imatinib, dasatinib or ponatinib were 32%, 61%, and 80%, respectively.

OncoTherapy Network: What are the clinical implications of your team's findings? How can the prognostic information yielded by PCR monitoring of BCR-ABL1, be used?

Dr. Short: We believe that periodic MRD monitoring of BCR-ABL1 in either the peripheral blood or bone marrow should be used in all patients with Ph+ ALL, as this can identify patients at very high risk for clinical relapse who may benefit from treatment intensification. For example, in our cohort, we identified several patients with MRD relapse in whom prompt intervention by the treating physician appears to have prevented clinical relapse. In two patients who had previously discontinued TKI therapy, the TKI was reinitiated and CMR was again achieved. In another two patients, allogeneic stem cell transplantation (ASCT) was performed, which appears to have prevented clinical relapse. In patients who did not meet strict criteria for MRD relapse, but had a BCR-ABL1/ABL1 transcript level of 0.08%, change of TKI from dasatinib to ponatinib allowed the patient to again achieve CMR and may have prevented impending clinical relapse.

Dr. Short: Prospective studies are needed to clarify the optimal timing and frequency of MRD monitoring in Ph+ ALL as well as the optimal therapeutic intervention when MRD relapse is observed. Our results are suggestive that treatment intensification, either with a more potent TKI or with ASCT, may prevent clinical relapse in some patients.

Efstathios Kastritis, MD, on Implications of Positive Results From the Phase 3 ANDROMEDA Study 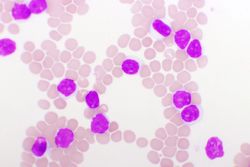