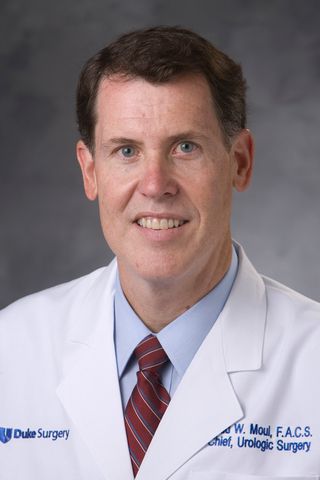 A 36-year-old male with a history of cryptorchidism of the right side, treated with orchidopexy at the age of 4, presented with bilateral testicular swelling. Investigations included laboratory workup, ultrasound of both testes, as well as CT-scan of the chest, abdomen, and pelvis. Initial treatment was bilateral orchiectomy.

Background: A 36-year-old male with a history of cryptorchidism of the right side, treated with orchidopexy at the age of 4, presented with bilateral testicular swelling.

Investigations: Investigations included laboratory workup, ultrasound of both testes, as well as CT-scan of the chest, abdomen, and pelvis. Initial treatment was bilateral orchiectomy.

Results: Scrotal examination revealed a mass on the left side and a small right testis with a hard mass at the lower pole. One markedly enlarged right inguinal lymph node was palpable. LDH, HCG, and AFP were significantly elevated. Scrotal ultrasound revealed a homogeneous hypoechoic right testis without a mass and a heterogeneous mass containing multiple inhomogeneous cystic areas on the left side. A hypoechoic mass was visualized in the right groin. CT evaluation revealed an enlarged retroperitoneal lymph node on the left side.

Conclusions: Due to improved diagnostic tools as well as the establishment of various adjuvant treatment options, the mortality of testicular cancer generally decreased in the last decades. However, metastatic bilateral testicular cancer of different histology is a challenging situation for the urologist, which warrants further discussion. Adjuvant treatment as well as postoperative follow-up should be chosen carefully.

Testicular cancer is one of the leading cancers affecting younger men in Western countries.[1] The estimated incidence in the United States for 2009 is about 8,400 cases, and the testicular cancer–related death rate is estimated to be 380.[1] Due to improved diagnostic tools as well as the establishment of various adjuvant treatment options, the mortality of testicular cancer has decreased significantly in the past decades.[2]

Synchronous bilateral testicular neoplasm is a rare situation, involving about 2% of patients.[3,4]

To the authors' knowledge, we report the first case of a patient affected by synchronous testicular cancer of different histology. This new and challenging clinical situation, as well as the various treatment options, will be discussed.

A 36-year-old male presented to his primary care practitioner with bilateral testicular swelling. He is a father of one child (6 years old) and has unsuccessfully tried to conceive for the past 6 years. The patient has a history of cryptorchidism of the right side, treated with orchidopexy at the age of 4. This fact puts him into a higher risk group for testicular cancer.[5]

Scrotal examination revealed a hard and slightly tender mass that measured approximately 6 × 7 cm on the left side. On the right side, a very small testis with a hard nontender mass at the lower pole was noted that measured approximately 1 × 2 cm. In the right inguinal region, an enlarged lymph node, suspicious for metastatic disease, was palpable. No left inguinal nodes could be palpated. Laboratory workup revealed significantly elevated LDH (313 U/L), HCG (306.2 IU/L), and AFP (1652.0 ng/mL).

CT of the abdomen, demonstrating a positive retroperitoneal lymph node (delineated by arrows).

Outside scrotal ultrasound determined a homogeneous hypoechoic right testis without a distinct mass, measuring 3.8 × 4.1 × 5.2 cm. The left testis measured 6.7 × 4.7 × 5.7 cm, demonstrating a marked heterogeneous mass that contained multiple cystic areas, some of which had high echogenicity. In the right groin, a hypoechoic mass was visualized that measured 3.8 × 3.1 × 0.6 cm. The outside report of a pelvic CT described a soft tissue mass in the right inguinal region. Otherwise, the CT report was negative. A left radical inguinal orchiectomy and a right inguinal testicular exploration were performed. Intraoperative frozen section of the right testicular mass confirmed malignancy and therefore we proceeded with right radical orchiectomy as well as with a right excisional biopsy of the enlarged inguinal lymph node.

Histopathological evaluation of the specimens revealed a seminoma of the right testis that invaded the tunica vaginalis as well as the spermatic cord. The soft tissue mass in the right groin revealed metastatic seminoma (5.4 cm, one of three lymph nodes), which was positive for extracapsular extension. Together, these findings resulted in stage pT3 pN3 Mx of the seminoma.[6] Histopathological evaluation of the left testis revealed a mixed nonseminomatous germ cell tumor (NSGCT) with an immature high-grade teratoma (60%), embryonal carcinoma (25%), and yolk sac tumor (15%) that demonstrated vascular invasion, stage pT2 pNx Mx.[6]

Up to eight lymphatic channels ascend in the spermatic cord bilaterally and run medially into the retroperitoneal area. Lymph nodes draining the right testis are mainly located within the interaortocaval area, at the level of the second vertebral body.

Lymph streams of the left testis are mainly draining directly into the para-aortic region in an area bounded by the renal vein superiorly, the aorta medially, the ureter laterally, and the origin of the inferior mesenteric artery inferiorly.

The patient described in the current case presents with a positive lymph node in his right groin. Although this is an unusual side of lymph node metastasis, subsequent metastasis may occur in a retrograde fashion to the common external and inguinal nodes, or cephalad via the cysterna chyli, thoracic duct, and supraclavicular nodes, following spread of germ cell neoplasms to either the left or right primary echelon of nodes.

Diagnosis and Staging of Case

Based on the clinical and histopathological evaluations, the testicular tumor on the right side can be staged as a pT3 pN3 Mx (stage IIC), independently of a positive/negative retroperitoneal lymph node.[6,7] The International Germ Cell Cancer Collaborative Group (IGCCCG) staging system indicated this case as a good prognosis group; 56% of the cases are diagnosed at this level at initial presentation. The overall 5-year progression-free survival is estimated to be 90%.[8]

Based on the clinical and histopathological evaluations, the testicular tumor on the left side can be staged as either a pT2 cN0 Mx, S2 (stage IS) or a pT2 cN1 Mx, S2 (stage III).[6,7] In either situation, the IGCCCG staging system indicated this case as an intermediate prognosis group; 28% of the cases are diagnosed at this level at initial presentation. The overall 5-year progression-free survival is estimated at 80%.[8]

At the moment, we are unable to verify whether the retroperitoneal lymph node is affected by the NSGCT or the seminoma. In the following section, we classify the staging options and highlight the adequate treatment options for each tumor entity.

Recommendations for follow-up, especially concerning imaging such as CT scans, have been discussed recently without consensus.[8,15] However, most of the centers, including our institution, tend to still follow the conservative follow-up recommendations.[15] The scheduled follow-up for the current patient is illustrated in Table 1.

Management of the Case

In the current situation, the patient was diagnosed as having a pure seminoma of the right testis as well as seminoma in one right inguinal lymph node, a NSGCT of the left testis, and a left retroperitoneal metastasis of unknown origin. At the current time point, we are unable to verify whether the retroperitoneal lymph node is affected by the NSGCT or the seminoma. However, the fact that the NSGCT was diagnosed in the left testis, as well as in the laboratory findings, both suggested that the retroperitoneal lymph node is affected by a NSGCT.

Lately, some promising studies were published describing treatment options for non-advanced as well as advanced NSGCT.[16,17] However, because the origin of the retroperitoneal metastasis is unknown, we decided to follow the current standard adjuvant treatment for a stage III mixed NSGCT (pT2 cN1 Mx, S2) and scheduled the patient for adjuvant chemotherapy. Consequently, we determined four cycles of cisplatin, etoposide, and bleomycin to be the appropriate adjuvant treatment.

Bilateral detected testicular neoplasm is a rare situation, and to the authors' knowledge, at present there is no case reported of a patient affected by synchronous testicular cancer of different histology. This exceptional clinical scenario is a challenging situation for the urologist. The current discussion can help with the selection of treatment for future patients who are diagnosed simultaneously with a synchronous bilateral testicular tumor of different histology.

How to Treat Metastatic Malignant Triton Tumor in an Adolescent