Stromal Cells May Be Involved in Development of Breast Carcinoma

COLUMBUS, Ohio-New evidence suggests that the genetic changes leading to breast cancer occur first in the epithelium of breast tissue, and then are followed by corresponding alterations in the surrounding stroma.

COLUMBUS, OhioNew evidence suggests that the genetic changes leading to breast cancer occur first in the epithelium of breast tissue, and then are followed by corresponding alterations in the surrounding stroma.

"We used to think that the surrounding structure of the cancer cell was just a silent bystander in the process of carcinogenesis. Now we know better," said Charis Eng, MD, PhD, William C. and Joan E. Davis Professor and director of the Clinical Cancer Genetics Program, Ohio State University Comprehensive Cancer Center.

The study, published in Human Molecular Genetics (September 1, 2001), suggests that the development of breast cancer is a multistep, multicell process.

A new technology, laser capture microdissection (LCM), allowed the researchers to isolate cancer cells from normal cells and to separate epithelial cells from stromal cells. The laser beam can dissect tumors one cell at a time.

"Before LCM, the study of cancer genetics entailed grinding up a lump of tumor comprising a mixture of cells and examining the "mixed bag" of cells for gene alterations," Dr. Eng told ONI.

Using LCM, the researchers microdissected each compartment of 41 sporadic invasive breast adenocarcinomas. They extracted DNA from each set of cells and measured the specimens for loss of heterozygosity (LOH), a technical indicator for the loss of a tumor suppressor gene.

"Most researchers in human cancer genetics believe that the earliest genetic event in any cancer is represented by the most frequent event. In our case, that was LOH. Thus, by arraying the most frequent LOHs first and the least frequent LOHs later, we have proposed a model of multistage carcinogenesis of serial or parallel LOH at specific markers in the epithelium vs stroma," she said.

Dr. Eng stressed that if these observations are replicable, the findings might dramatically alter both breast cancer treatment and prevention. "We currently target everything. However, we think that novel therapies and preventive agents tailored for novel molecular targets in stroma might become possible and might represent a better strategy," Dr. Eng said. 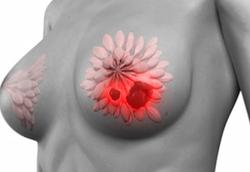 Correlation Identified Between Financial Toxicity and Disparities in Psychosocial, Physical, and Mental Quality of Life in Breast Cancer