Lenalidomide plus rituximab consolidation therapy prior to bendamustine/rituximab induction did not significantly improve progression-free survival in patients with mantle cell lymphoma in the phase 2 NCTN E1411 trial.

The addition of lenalidomide (Revlimid) to rituximab (Rituxan) consolidation prior to bendamustine/rituximab induction did not significantly improve the primary end point of progression-free survival (PFS) in patients with mantle cell lymphoma (MCL), according to a presentation on results from the phase 2 NCTN E1411 trial (NCT01415752) during the 2022 American Society of Hematology (ASH) Annual Meeting. However, bendamustine/rituximab induction plus rituximab-based fixed duration consolidation could be a potential first-line approach based on a high complete response (CR) rate.

Investigators of the phase 2 E1411 trial randomly assigned patients with MCL to one of 4 treatment cohorts. In the first cohort, patients received an induction therapy consisting of 90 mg/m2 per day of bendamustine on days 1 and 2 plus 375 mg/m2 of rituximab on day 1 every 28 days for 6 cycles, followed by consolidation rituximab at 375 mg/m2 of every 8 weeks for 12 doses.

In the second cohort, patients received the same bendamustine-rituximab induction therapy plus 1.3 mg/m2 of bortezomib on days 1, 4, 8, and 11 intravenously or subcutaneously followed by the same rituximab consolidation.

In the third cohort, patients received bendamustine-rituximab followed by rituximab consolidation with 15 mg per day of lenalidomide on days 21 and 28 for 24 cycles.

In the fourth arm, patients received bendamustine-rituximab with bortezomib followed by lenalidomide plus rituximab consolidation.

The study aimed to assess PFS, the primary end point, for consolidation rituximab and lenalidomide/rituximab. Secondary end points for the trial included safety and toxicity.

Patients with untreated MCL, an ECOG performance status of 0 to 2, and adequate organ function were eligible to enroll on the trial. Patients were stratified by age and Mantle Cell Lymphoma International Prognostic (MIPI) measures.

Overall, 40%, 31%, and 29% of patients overall had low, intermediate, and high MIPI scores, respectively. Additionally, 98% of patients had an ECOG performance status of 0 or 1.

Non-hematologic AES of grade 3 or higher that occurred during consolidation included rash in 4 patients, thromboembolic AEs in 3 patients, second treatment-related malignancies in 3 patients, fatigue in 9 patients, and diarrhea in 5 patients. 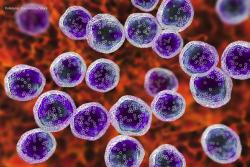