Atezolizumab plus R-CHOP appeared to yield durable clinical benefit and a safety profile consistent with known toxicities in patients with previously untreated DLBCL, according to data from a phase 1b/2 trial.

Treatment with atezolizumab (Tecentriq) in combination with rituximab (Rituxan), cyclophosphamide, doxorubicin (Adriamycin), vincristine (Oncovin), and prednisone (R-CHOP) in patients with previously untreated diffuse large B-cell lymphoma (DLBCL) resulted in long-lasting clinical activity with a toxicity profile that did not differ from the known profiles of the individual drugs, according to data from a phase 1b/2 trial (NCT02596971).

“These analyses provide useful insights into the efficacy and safety of atezolizumab in the treatment of DLBCL and have the potential to guide further clinical development,” the investigators wrote.

The study evaluated 42 patients with previously untreated DLBCL, nearly all of whom (95%) had Ann Arbor stage III/IV disease at the time of study initiation. Additionally, 69% of patients were categorized as being high-/intermediate- or high-risk by International Prognostic Index (IPI) score and 74% had extranodal disease. Most participants were male (62%) and 52% were 65 years or older, with a median age of 65 years (range, 22-84). The majority of patients had an ECOG performance status of 0 or 1 (88%).

Patients received R-CHOP induction therapy during the first treatment cycle followed by atezolizumab plus R-CHOP from the second cycle onward. The regimen consisted of intravenous atezolizumab at 1200 mg every 3 weeks from cycle 2 onward, intravenous rituximab at 375 mg/m2 in cycles 1 through 8 along with 6 or 8 cycles of standard-dose CHOP. Furthermore, eligible patients who achieved a CR after induction therapy received consolidation therapy consisting of intravenous atezolizumab at 1200 mg on day 1 of every 21-day cycle. Investigators theorized that foregoing atezolizumab in the first cycle would reduce the risk of infusion related reactions (IRRs) during the first infusion of rituximab when the incidence and severity of rituximab-related IRRs are highest.

All patients experienced at least 1 adverse effect (AE) and 76.2% experienced at least 1 grade 3/4 AE, the most common being neutropenia (45.2%) and febrile neutropenia (11.9%) during the induction phase. The most prevalent AEs of any grade were neutropenia (52.4%), constipation (42.9%), and fatigue (40.5%). A total of 15 patients discontinued treatment due to AEs, including 6 who stopped treatment the during induction portion of the regimen. A single patient experienced a fatal AE that is believed to be related to atezolizumab or rituximab and 40.5% experienced AEs of special interest, 28.6% of which occurred during consolidation therapy; these toxicities included increased lipase (9.5%), increased amylase (7.1%), hypothyroidism (7.1%), and pancreatitis (4.8%). Most of these (65%) were reversible at the time of analysis.

“The overall safety profile of the atezolizumab plus R-CHOP combination was manageable. However, the combination…appeared to introduce AEs not typically associated with R-CHOP but which were consistent with the known safety profile of atezolizumab, including elevated amylase and lipase, pancreatitis, and hypothyroidism,” investigators concluded. “A comparative study would be needed to ascertain whether the addition of atezolizumab to R-CHOP provides significant benefit [vs] R-CHOP alone, but the available data suggest efficacy differences between the two treatments are likely to be modest and the additional AEs introduced by atezolizumab should be taken into consideration.”

The single-arm design of this study prevented any direct comparison with the standard DLBCL treatment. Investigators did not recommend further investigation of the regimen given the modest benefits they observed, but these data may nonetheless provide the groundwork for further clinical development. 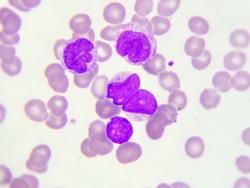 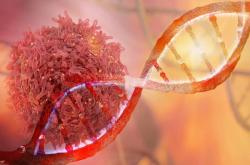 DLBCL Outcomes May be Predicted Using ctDNA as Prognostic Tool